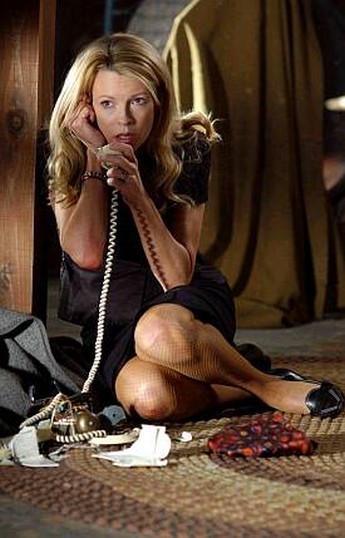 This film is plausible only exactly as long as you don’t think about it. The second you do, the premise on which it is built evaporates. Okay, you get a call from a woman who claims she has been kidnapped. Put her on hold, dial 911, and conference call her in. Get on with your life. Of course, the hero here (Evans) doesn’t think like that, or take advantage of the other methods by which he could pass the situation, on to those better capable of taking care of it. As a result, he ends up in the inevitable series of car-chases, shoot-outs and other action sequences. Interestingly, there’s a plot twist revealed in the middle which would largely have removed this possibility, and the film would probably have been stronger had it been apparent from the very start.

Instead, much of this falls into two categories: unbelievable or predictable. When the central conceit is operating, it’s difficult to buy into; when it’s not, it’s your usual story of good guys vs. bad guys, chasing each other in locations and ways we’ve seen a thousand times before. However, it does help that the performances are above average; Evans is a decent hero, Basinger quite plausible as the terrorised victim, and Statham, despite his accent, makes as effective a villain as you’d expect. Though it’s Macy who stands out, a veteran cop with dreams of opening a day spa, who is caught up in the events that unfold. Together, these four hold things together better than you’d expect from the script even if, without that, this remains a one-concept movie, with a flawed idea at its core.