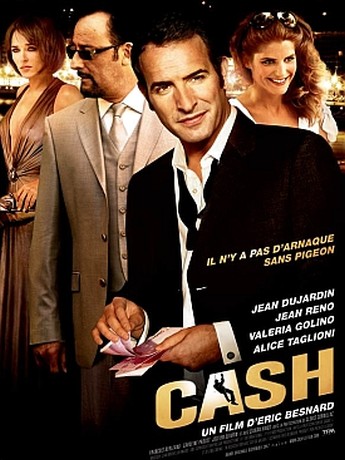 This jury will likely remain out on this dizzuing whirl of confidence trickery, scams, double-crosses and treachery, until I see it again. Only then, will I truly be able to get a handle on the plot, and see if the pieces fit together as they should. For now, let’s give it a cautious welcome, despite the pretentious dollar sign in the title, which is neither amusing nor clever [and you’d think a French film would avoid such obvious American influence]. Cash (Dujardin) is a con-man, who finds himself trapped by Interpol cop Molina (Golino). She wants to make some extra money on the side, and also intends to use Cash to trap the King of Con, Maxime (Leon), who is working on a scheme to take millions of dollars in diamonds from a five-star hotel in Monaco. Which, by itself, would likely be enough to power any self-respecting movie, but noooooo… In Besnard’s script, no-one is what they seem to be. No-one is even what they seem to seem to be. It all gets more than a bit dizzying, especially towards the end.

That said, it’s the kind of movie I really enjoy watching, following a skilled writer as he creates and leads us through a maze of entanglement. That side of things, Besnard has got down pat, but it seems to have been at the expense of the characters – they feel less like human beings, than chess pieces that are being manipulated by the script towards the desired conclusion. The truly best films in the genre e.g. Nine Queens, manage to blend the mechanics of the confidence games with a humanity and personality – that side of things feels neglected here. Golino gets perhaps the most interesting role, her law-enforcement official apparently frustrated by a glass ceiling in her profession, to the extent where she decides the crime does pay. Might have been better to have the focus of the story be on her, rather than Cash, where Dujardin fails to add much life with his performance. Still, as a clockwork orange of a movie – better enjoyed for its mechanical delights than its flavor – it works perfectly well.