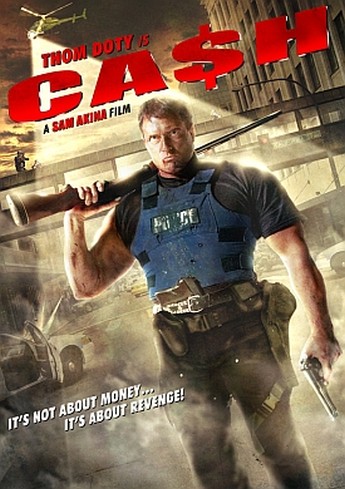 Cash (Doty) is out for revenge on Hector Gonzales (Lloyd), the man responsible for raping and killing Cash’s wife a decade previously. Over the course of one day – albeit with any number of flashbacks to fill in the gaps – he works his way up the food-chain to the inevitable confrontation with his target. Where, I have to say, there is a weapon used, the likes of which I probably haven’t seen since… Well, The Story of Ricky came kinda close. Otherwise, I can’t think of anything that quite compares, so points for innovation there. This is in marked contrast to the rest of the film. Just yesterday, I was writing about In Bruges and how it avoided the fate of being a shallow Tarantino clone: this movie…not so much. I mean: even the film’s site (now down) says, “has the press drawing favorable comparisons to the work of established director Quentin Tarantino.” C’mon, promote your own merits, why don’t you? It shamelessly apes the same convoluted story-structure as Pulp Fiction – enough to get it on my shit-list to start with, making needlessly complex something that should fly straight as an arrow – and the oh-so “quirky” typography of the title doesn’t help. Even the alternate title echoes Joe Carnahan’s debut feature, Blood Guts Bullets and Octane.

Credit to the makers for putting together a feature-film on a small budget, and the production values aren’t bad, though some of the audio seems out of synch or otherwise poorly-suited to the visuals. On the other hand, the action sequences are well staged, especially a final shootout which stacks the bodies like so much lumber, and the blood work in general is copious and effective. But the lead actor is so completely emotionless, he gives you absolutely no reason to root for him in the first hour. I assume they were going for a ‘dead inside’ character, except by the time his motivation is finally revealed, I’d given up hope and was now just struggling to remain awake. The script tries to keep too many balls in the air, with the various threads and factions, and ends up dropping most of them. While Akina does show some potential, he needs to find his own voice rather than being an obvious QT-wannabe. Either that, or start doing coke in the same volume as Quentin and punching out producers.