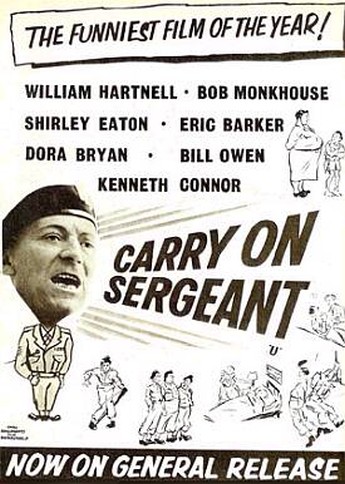 This was the first entry – Val Guest’s Carry On Admiral, made the previous year, only inspired the title here. Indeed, the film was no original work, but based on The Bull Boys, a story about a ballet-dancer whose boyfriend is called up to serve on the day of their marriage, rewritten as a comedy by Norman Hudis. Still, the series hits the ground running, the familiar core already in place: quirky characters in off-the-wall situations, though the farcical elements are reined back somewhat here, and the innuendo that became a staple of the series is almost entirely missing. Future smug gameshow host Monkhouse plays the conscript, and his new wife (Shirley Eaton, later on to achieve gold-painted fame as a Bond girl) gets a job in the canteen to stay near him – while ten years later, this would likely have led to all manner of sexual hi-jinks, here, that angle is all but ignored.

Instead, the main plot is these recruits’ incompetence, under Sgt. Grimshawe (Hartnell pre-Doctor Who – he and Charles Hawtrey played similar roles here and in 1950’s hit TV series, The Army Game); he seems doomed to lose a £50 bet, that he’ll have the best platoon in his final weeks before quitting the Army. There’s also an ongoing thread about the unending hypochondria of Private Strong (Connor), which brings him into conflict with camp doctor Captain Clark, played by Hattie Jacques, the matronly kind of role she’d occupy often in the series. She gets the best line, in response to Strong’s concern about his ‘floating knee’, spitting out “Let me know when you feel it sinking.” Similarly, Hawtrey is the uber-wimp we know and love, but Kenneth Williams is a surprise. His character, while still a know-it-all, is oddly subversive, with Williams restrained, not mining every ounce of camp from the role, as he’d later do, with great success. Though the concept is extremely dated (Britain abandoned conscription in 1960), enough humour flows, mostly from the great characters, to keep the film ticking over.