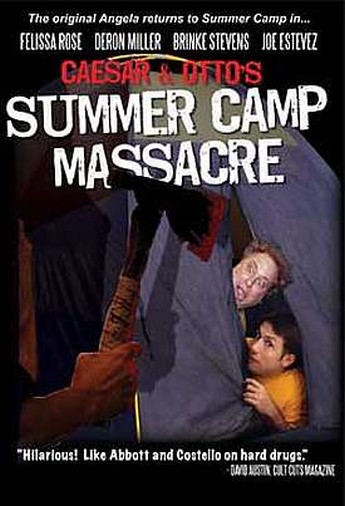 Flamboyant wanna-be actore Caesar (Campfield) and his brother/punching-bag Otto (Chomicki) have to bail town after Caesar beats up the mentally-challenged son of the local police-chief. They end up employed as counselors at Camp Sunsmile, under the ever-cheery Jerry (MacFarlane) where they’re trained for the imminent arrival of the next batch of campers, though the arrival of their Dad diverts Caesar into a sideline of robbing his fellow employees, save for the suspicious Carrie (Rose). She keeps a gun in her purse and has a scrapbook detailing murders at campgrounds all across North America. When various members of the team start to turn up as corpses, can Caesar and Otto solve the mystery, before they all become equally dead? I must confess to being only vaguely familiar with the 1983 slasher film Sleepaway Camp that is apparently largely being spoofed here – Rose played the trans killer in that one. It’s possible that devotees of that particularly-lurid genre entry might get more of this.

It’s more comedy-horror than horror-comedy – think Abbott and Costello meets Jason – which is not what we were seeking, and as such, might have worked better as a short than a feature. Campfield’s performance is straight from the school of humour epitomized by Jerry Lewis and Jim Carrey, and you know my feelings there: what’s amusing for the first twenty minutes became a chore by the middle, and from there on, I was cheering for the killer. It’s one shrill note of Red Bull overdosed hysteria, and quite overpowers everything else in the movie. This is something of a shame, since there is certainly scope for taking a few pot-shots at the genre – though give the failures of previous efforts, it seems harder to pull off than to conceive. Chomicki is more restrained and, hence, effective at Otto, and there are some fun cameos to be found in the rest of the cast. However, Campfield seems to be adopting the Quentin Tarantino approach: writing, directing and starring in his own film. It doesn’t work for QT and, while there are glimpses of talent here, Canfield needs someone else to reign in the more self-indulgent excesses painfully obvious here, and avoid trying to steal every scene with frantic scenery-chewing.