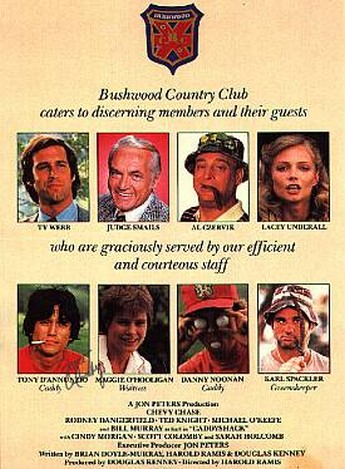 This is widely regarded as a classic of 80’s comedy, and certainly contains more than its fair share of fine moments. However, the comedic value of the supporting cast is greatly overshadowed by the charisma-free performance of O’Keefe. He plays caddy Danny Noonan, and the film’s plot actually centres on his twin pursuits of a golf scholarship and action with the opposite sex. If they’d dumped him entirely, and concentrated instead on Chase’s Zen golfer, Knight’s uptight judge and Dangerfield’s boorish millionaire, it’d have been a lot better; as is, large parts of the main story come over as no more than a lame, tame Animal House imitation.

Then there’s Bill Murray: his Carl the Groundkeeper is a memorably lewd slob, whose single-minded pursuit of a gopher leads to the explosive finale. Murray largely works alone in the film – they added one scene with Chase when the makers realised this – but whether making animal sculptures out of C4, whacking innocent flowers with golf clubs, or drooling over the lady members, he steals the show. It remains a weird mix of comic styles, combining the laid-back and dry (Chase) with the loudmouth and vulgar (Dangerfield); however, anything that keeps the camera off Noonan can only be welcomed. Definitely a product of its times, there’s still enough to keep me amused a quarter-century later.