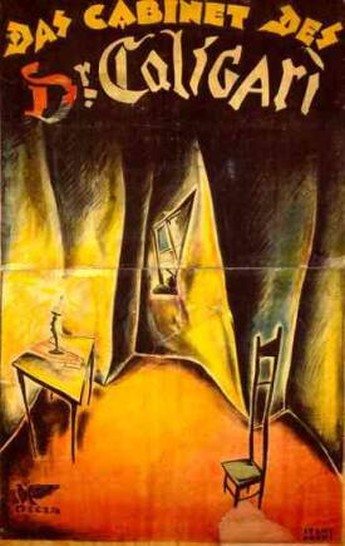 I’m not a fan of silent films; to me, dialogue (and sound in general) is such an integral part of the cinematic experience, that taking it away is akin to breaking a pianist’s left hand before he plays a concerto. I generally find them difficult to watch, with a slow pace because of the need to progress the plot through means other than speech. Still, can’t deny Caligari‘s influence, among the first to establish an alternative to reality, rather than merely depicting it, most obviously in the angular, skewed sets. This surreal approach can be seen right up to the likes of Dogville, and the narrative, particularly the final twist, is also well ahead of its time. A travelling hypnotist (Krauss) and director of an insane asylum, uses a sleepwalker (Veidt) for murder; or does he? [The ending was changed by ‘request’ of the government.]

If the technical aspects are mostly still impressive (save the overuse of irising in and out, which occurs about ten times as often as it should), the acting creaks horribly. For me, any chance of taking that side seriously, evaporated every time I remembered Eddie Izzard’s scenery chewing in Shadow of the Vampire, and realised it wasn’t an exaggeration, especially as far as Feher is concerned. You’d think it’d be ripe for a Hollywood remake, but going by the half-hearted attempts (most recently in 1989 by Stephen Sayadin, better known for Cafe Flesh), it’s perhaps a better tribute that so many movies, such as Open Your Eyes, have adopted its style, themes and approach.