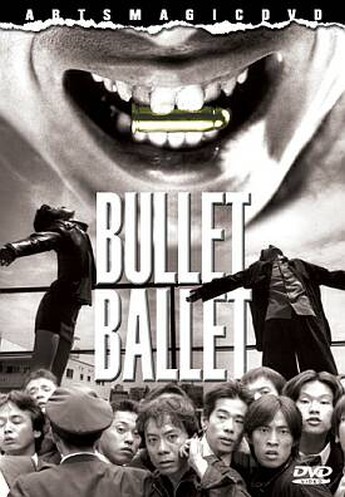 This has been described as Tsukamoto’s least accessible film – which is saying something, coming from the director of Tetsuo: The Iron Man, a movie about a man whose penis mutates into a power drill. It’s the story of Goda (Tsukamoto), who becomes obsessed with getting the same kind of gun his girlfriend used to kill herself. In America, this’d entail a quick trip to Guns R Us; for a regular Japanese guy, it’s almost impossible. Goda’s obsession grows, until he crosses paths with a street gang; initially they treat him as easy prey, but he falls in love with one of their number, Chisato (Mano), and is eventually their only hope of survival as they, too, become victims of violence.

This starts at a scary level of intensity, with a brutally bleak portrayal of gun fetishism, for which the b&w cinematography is perfect, and it’s easy to call this a Japanese Taxi Driver. When focus shifts to the gang and Goda’s relationship with them, it’s largely a letdown, though Chisato’s game of chicken with a train will likely stay with you. Otherwise, in contrast to the uniquely fascinating Goda, the gang feel like shallow parodies of disaffected youth. Every second of screentime devoted to their uninteresting characters, is a second less for him, and the mechanism by which he gets his weapon is also so contrived as to sap much of the impact. While regaining some impetus at the end, the overall impression is a truly fabulous short film, padded out to feature length.