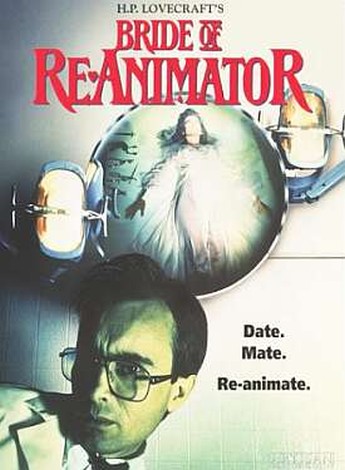 “My God! They’re using tools!” With one line, Jeffrey Combs sweeps in and rescues this whole movie. Okay, Combs has all the good lines, and without him, this would be a sad little sequel. Bruce Abbott still can’t act, Udenio (who made her debut in Passion Flower Hotel) is no Babs Crampton, and even David Gale’s talents are underused, since we only get to see him from the neck up – though I was amused to see where his character went, given Herbert West’s comment in the original film. Plotwise, no attempt is made to explain how Dr West (Combs) escaped in the original movie; we first see him and reluctant partner Cain (Abbott) in a Peruvian civil war, for no readily apparent reason. Soon, they’re back in the US of A, continuing their experiments while a local cop, investigating the “Miskatonic Massacre”, closes in.

Far too obviously, this aims for Bride of Frankenstein, but watching West wax lyrical as he flies into delusions of god-hood covers a great deal of weakness. The effects are nicely done too, though the idea they can now re-animate anything, is only used to a fraction of its potential. Their integration into the storyline…well, they aren’t. Everything moves in a herky-jerky fashion towards an impressively excessive climax, largely failing to build upon the original, or even re-invent it. However, no film can be entirely condemned with speeches such as, “The only blasphemy is to wallow in in-SIG-nif-i-cance!”, uttered by a B-master like Combs.