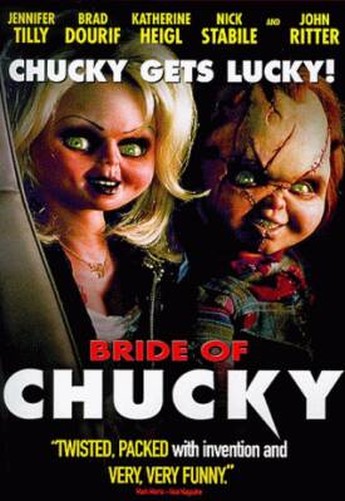 It’s been a long time since I’ve seen such a totally twisted film. The central concept, of souls being transferred into dolls’ bodies, is totally ludicrous, yet everyone involved goes at it with such gusto that you can’t help getting into the (malicious, gleefully sadistic) spirit of it all. Tilly is excellent, both alive and dead, chewing up even more scenery than the voice of Chucky, Brad Dourif. In comparison, the humans are bland and colourless, though it’s a nice touch to have two couples-on-the-run, one sweet as pie, the other evil as hell.

Cynically warped, yet in contrast to things like Scream, the in-jokes show a genuine liking for the horror genre, and you laugh with the film as much as at it. Difficult to believe that this is from the Hong Kong director who did the shampoo advert-like Bride With White Hair, and I think credit should also go to scriptwriter Don Mancini. Gory when it needs to be, inventive from start to finish, and proof positive that even the most tired of franchises can be brought back to life, given the chance.