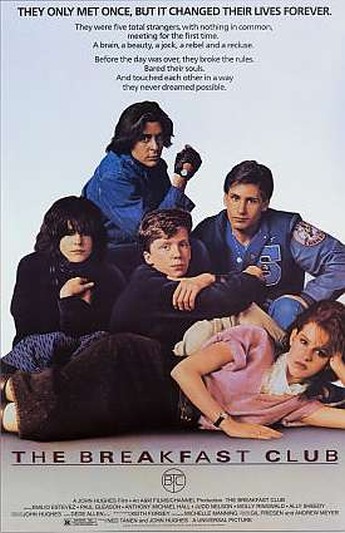 Five students – the jock (Estevez), the nerd (Hall), the delinquent (Nelson), the princess (Ringwald) and the goth (Sheedy) – all find themselves serving an entire Saturday in detention. Initially, their animosity to each other is clear, with the athlete and the criminal nearly coming to blows, mostly over the latter’s disrespectful (or brutally honest, if you prefer) attitude towards the prom queen. However, as the day progresses, and with the helpful loosening of a large bag of marijuana, the five realize they aren’t so entirely different from each other, with the similarities outweighing their differences. Everyone’s parents suck, while peer pressure is no fun, regardless of who your peers might be, And so, by the end of the day, couples have been formed: of course, there’s still no-one for the poor nerd, and the goth had to undergo a radical makeover at the hands of the princess.

I could really tear into this a million different ways: for the message it sends that attempts to be “different” or an individual are a sham [an interestingly fascist concept], its promotion of drug use among the young, the unconvincing nature of most of these “high-school students” – Nelson was 25 when the film was being filmed – or for a resolution that’s so neat and tidy as to be completely ludicrous. However, it goes so much against the grain of high-school that it is an incendiary and potentially revolutionary work, powered by Nelson’s firecracker performance: initiallly, he comes over as nothing but an asshole, but he sacrfices himself when the five are wandering the school, taking the heat so the others can sneak back to their detention.

It’s unexpectedly heroic, and the dialogue-driven approach is in marked contrast to the other, more hormone-driven or frantic teen-comedies of the time, even those in which Hughes was involved, such Ferris Bueller’s Day Off. [We do wonder whether Molly Ringwald used a crotch double] The characters are initially broadly-drawn, yet most of the performances use the script to build upon this, and turn them into more than the shallow caricatures. Even the teacher supervising them is eventually humanized, tormented by the fact that “when I get old, they’re going to be running the country.” That’s where the film’s strength lies: it doesn’t pick a side, and allows you not just to see everyone’s point of view, but understand from where it emanates. Sure, it relies on contrivance of the most extreme order to push everything to a happy conclusion – and anyone who went to school knows how that just doesn’t happen. However, who’d want to see a film that realistically reflects life?