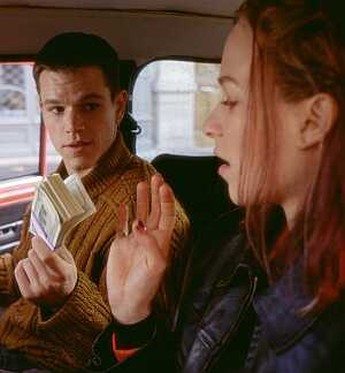 After a somewhat troubled production, the end result is perhaps equally troubled; not without its good points, yet with enough problems to prevent it from being anything more than a mild diversion. Damon plays ‘Bourne’; quotes used advisedly, since he is the man of a thousand identities. The problem is, since a bout of amnesia, he doesn’t know which one is real. Hauling in a conveniently passing, transient German, Marie Kreutz (Potente), he tries to find out who and what he is, while his CIA handler tries to rub him out as embarrassing evidence of a failed assassination attempt.

Fortunately, Bourne has all his old skills…except, conveniently, any interest in disguising himself, which you’d think might be an early step when every agency murderer in Europe is on your tail. As indeed would getting the hell out of Paris, rather than hanging round to investigate. The Bourne/Kreutz relationship is well handled – she provides a nice down-to-earth element – but there are moments which merely provoke laughter, such as one killer hurling himself out of a window, and the finale scarcely fares any better. Clive Owen turns up briefly as another hitman, and it’s telling that he makes more of an impact in two minutes than Damon does in two hours, with all his running around and punching people very hard.