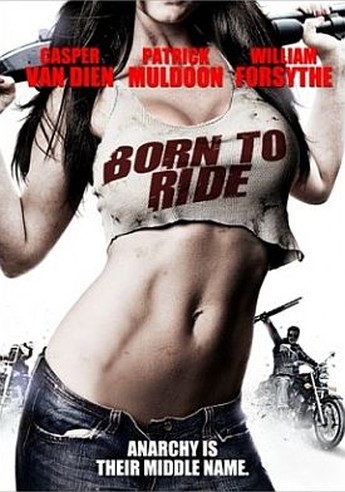 Let us be clear. We only watched this because we know a couple of people in the film – a good chunk was filmed locally here in Arizona. And it was only spotting the local locations that kept us going till we saw our friends, becausw this could be the worst script ever filmes. Two bikers, Mike (Van Dien with a horrible beard) and Alex (Muldoon), on their way to Sturgis, get involved with a plan to blackmail a politician, which sends two largely incompetent killers on their trail. That side could have been ok, but the makers lob in any number of angles that go nowhere and add nothing. The package they get from a veteran for delivery to his daughter in Indiana; Mike’s discovery of his true parenthood; the hitch-hiker they pick up; the robbery of a bar where our heroes are shooting pool [which is where one of our friends showed up]. They all happen, but none are of significant relevance to the movie, any more than the wraparound segment where Mike is being interviewed by a news crew. You hope that, somehow, all these elements will end up tying together, but when you reach the end, you look back and realize – no, they didn’t.

It’s almost like a Denise Richards class re-union: Van Dien and Muldoon were rivals for her affections in Starship Troopers, and Mike’s mother is played by Theresa Russell, who played Richards’ mom in Wild Things. Maybe Richards was the model for the DVD sleeve (right) – because otherwise, it’s got absolutely nothing to do with the movie. Both Russell and veteran actor William Forsythe, who also appears, need to have a quiet word with their agents. While you expect this kind of thing from Van Dien and Muldoon, this kind of film is an embarrassment for everyone involved in it [and that includes the people we know: while they were certainly the best thing about this from our point of view, this isn’t one I’d put on my resume]. It’s simply tedious as hell to sit through, unless you are fascinated by bikes, and even then, the ten minutes of footage from Sturgis which is intercut with the end-credits, is likely the peak there. Otherwise, I can only conclude this was the result of some bizarre money-laundering scheme for a Hell’s Angels gang.