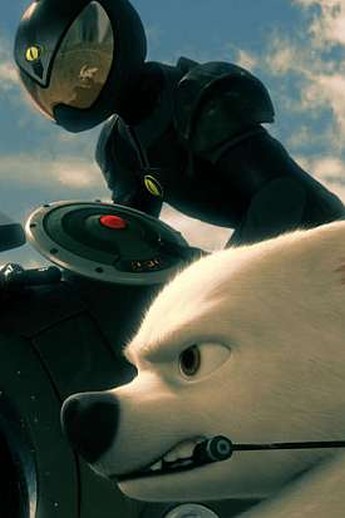 Bolt is a dog with superpowers: laser-eyes, amazing speed and a bark that can overturn tanks. Or, at least, he thinks he has superpowers. In reality, he’s just the canine star of a Hollywood TV show, kept in the dark about the special effects, so his performance is more convincing. When a cliff-hanger ending leaves his mistress Penny (Cyrus) apparently kidnapped by the villains of the series, Bolt heads off to try and rescue her. He ends up in New York, and the local pigeons convince him that Mittens (Essman), the cat who is scourge of their life, knows where Penny is. Together with a hamster named Rhino (Walton), a TV fan who is equally delusional about Bolt’s superpowers, the animals make their way back across the country to California. Will Penny remember him? And when fire breaks out on the set, where filming has continued with a Bolt-alike, will he and his friends be able to save her?

This is a perfectly-competent piece of mid-level CGI. No-one’s going to mistake it for Pixar, not when the streets of New York are so curiously deserted (and entirely free of non-Aryans too); however, the script has enough moments of wit to lift it up above its more childish colleagues. The supporting characters have a good deal more colour than Bolt himself, though this perhaps simply reflects my own preferences, being a cat person. As depicted here, dogs come across as brain-dead automatons, slobberingly-devoted to their owners and lacking any capacity for independent thought. And that’s their good points. Thus, after a striking and action-packed opening sequence, which plays like Michael Bay on meth, the pleasures I got from this were mostly along the sidelines, like the LA pigeons who want to break into the entertainment business. While entertaining enough, it’s largely forgettable: if you see it once, you’ll be amused, and have little interest in repeating the experience.