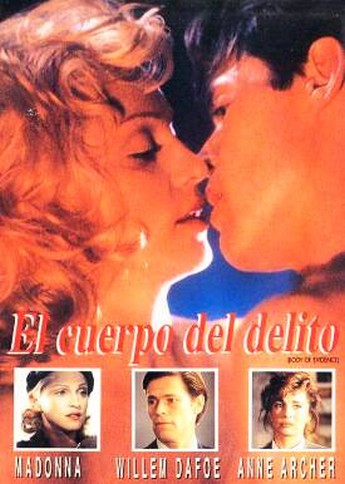 This film stars Madonna. I make a point of stressing it, since going by the storm of abuse this generated, seems like some people were expecting an Oscar-winner. In reality, it is, for want of a better phrase, basically Instinct: a European director helms a story about a blonde femme fatale who ensnares a legal worker with kinky sex. He has to decide whether she is or isn’t a murderess, and there’s even a police interrogation where they trade banter about coke. Yet this will make you yearn – and you might want to sit down before reading this – for the subtle touches of Ezterhas, Verhoeven and Stone. There’s a reason Basic Instinct made nine times as much at the US box-office.

Madonna is really the main problem. She’s just not credible as a gallery owner turned black widow, who screws rich men with heart trouble to death; when disparagingly referred to as a ‘cokehead slut’, you’ll likely be nodding in agreement. Dafoe isn’t much better; for example, we get little or no justification for why he, in the film’s most infamous scene, lets her drip hot wax on his dick. Personally speaking, I’d require weeks of convincing and even more alcohol. Mantegna comes off best as the prosecutor, and the court-room scenes work surprisingly well, with good assists from Frank Langella and Jurgen Prochnow. Sure, it’s no classic, yet it’s hardly the Gigli-like disaster claimed. If you stumbled across this late at night on cable, and it starred Shannon Tweed, it’d be passable entertainment, and writer Brad Mirman’s dialogue is merely the cheese on top of this sleaze pizza.