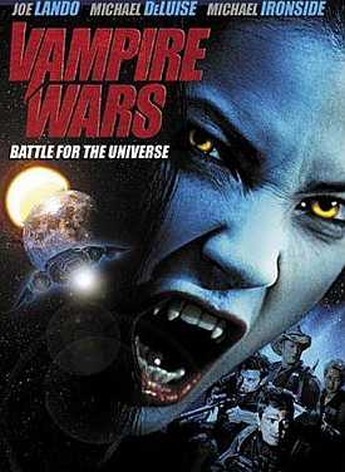 SciFi Channel movies are notorious for being all sizzle and no meat. This one is probably above-average for the genre; if it won’t make you forget any of the films which inspired it [Aliens, Pitch Black, Serenity, Blade and Starship Troopers as a start], it doesn’t embarrass them either. When mankind gets into space, we find it already inhabited – by a variety of toothy creatures who regard humanity as dinner more than co-habitants. The V-San squad cleanse planets before we move in; when their captain is lost on a mission, First Officer Underwood (Zamprogna) steps up, but has to earn the trust of his squad (Adachi, Pearl and Malthe – the latter playing a kinder, gentler vampire, spawned from ‘turned’ parents) and deal with a fifth column of humans who are working with the vampires, believing our species is the biggest threat to the galaxy.

If anything, there’s a bit much going on, and at time the exposition is so breathless, it feels like a pilot more than a movie – it mentions the wide variety of vampire species, but we only get to see about three, perhaps due to the small budget [US$1.7 million]. The characters rarely get beyond stereotypes – Adachi’s tough, ethnic minority chick isn’t fit to cleane Jenette Goldstein’s boots – and Michael Ironside is underused and underwhelming as the leader of the vampires. However, it’s rarely dull, there’s a surprising amount of gore, and contains one amusing sequence with a talking sock-puppet that reminded me of Frank Henenlotter’s Brain Damage more than anything. Look: it’s a SciFi movie and it’s called Bloodsuckers. If you’re expecting something apart from a way to pass two hours (including commercials), go elsewhere.