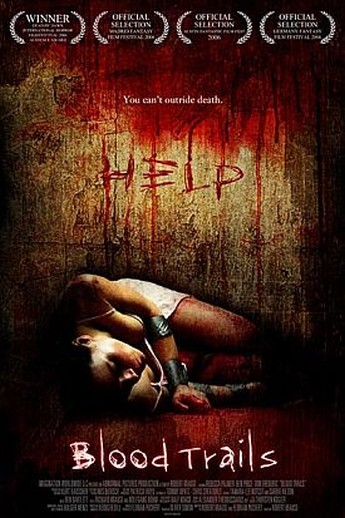 Anne (Palmer) has a one-night stand with a cop (Price), which turns nasty, when his sadistic tendencies are revealed. Despite – or perhaps because of – being haunted by those events, she subsequently makes up with her ex-boyfriend (Frederic), and the two head off in to the mountains for a weekend of cycling. There, she’s startled to discover the cop has followed them, and is intent on finishing what he started with Anne previously. The boyfriend doesn’t last long before getting his throat cut (if implausible, murder by bicycle is at least a first for the genre, as far as I know), and then it’s a game of cat and mouse, between heroine and stalker, as she tries to get off the mountain. There only one spot where there is any cell-phone reception, and Anne’s efforts to get help from others on the mountain, have an uncanny knack of resulting in those she contacts rapidly becoming dead.

There are a lot of problems here. It takes too long to get going, contains far too much cycling footage (ok: we get the point, she’s a cyclist No, really. We get the point!), and Anne’s actions are dumb, even by the low standards of slasher movies. She’s also incredibly accident-prone, to the point where I wondered if she was related to Wile E. Coyote – when she’s not riding her bike off cliffs, she’s getting knocked out by trees being felled on top of her. On the plus side, the mountain backdrop borders on the spectacular, there are a couple of decent segments, and the finale does add a nice twist to the cliché about the killer not being really dead, opening his eyes after he has been dispatched. It’s not enough to balance out the flaws, and even if Palmer is credible enough as the lean heroine, the idiocies forced on her by the script, drop her down into the large pile of forgettable final girls.