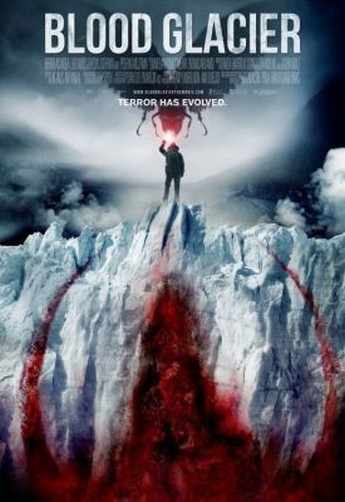 A climate research station high up in the Alps comes across an unexpected result of global warming; as the title suggests, it’s a glacier with a distinct red tinge. This appears to be caused by some kind of organic content, but before much more can be found out, bizarre incidents start to happen. The dog belong to veteran researcher Janek (Liebmann) is attacked by a “rabid fox”, and the decision is made to try and warn off an approaching second group, including a politician and Janek’s ex-girlfriend, Tanja (Malovcic), though he’s rather more concerned about his dog. [In a laudable move, the dog, played by Santos, receives higher billing than some of the humans – in the dubbed version of this we saw, this seems entirely fair, based on their performances as well] The other group won’t be dissuaded, and arrive just in time for things to really meltdown (hohoho). Because the red stuff turns out to be capable of mutating and merging the DNA of organisms with which it comes into contact. Want a falcon crossed with a mosquito? Or a fox-beetle hybrid? What about an ibex and… I’m not sure what, actually.

It’s an idea with almost unlimited potential: unfortunately, it’s alss largely untapped potential. in part because the film lacks the budhet or imagination to show us much. We get an over-sized beetle, the front portion of the ibex-thing, and a few glimpses of the falcon, but everything else is shrouded in darkness and or cut away from so quickly. As a result, there’s nowhere like the seame sense of awe as in the most obvious inspiration, John Carpenter’s The Thing. It also lacks the interesting characters, with Janek the only one to make any kind of positive impression, being a grumpy loner who does not work well with others. Everybody else is just there to run around or look aghast, save perhaps the politician, who demonstrates a willingness to wield pointy objects that is kinda surprising. The scenery looks very nice, and the glacier effect is understated enough to be highly effective. However, I was left wit a sense that they could have done a lot more with this, even if the limitations may not necessarily have been within the makers’ control.