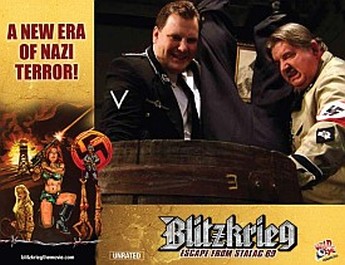 Naziploitation reached its peak in 1975, with Ilsa, She-Wolf of the SS, one of the most utterly perverse and tasteless movies ever made, anchored by the brilliant Dyanne Thorne – even if she can’t pronounce “reich” correctly. While there were subsequent, largely inept, attempts to follow suit [1977’s The Beast in Heat], the genre was basically dead by the end of the decade – and, let’s be honest, was hardly missed. However, the delirious inclusion of Rob Zombie’s trailer for Werewolf Women of the SS in Grindhouse has revived interest, with some talk of turning that into an actual feature. Naturally, indie cinema has got there first, and Blitzkrieg is probably the first Naziploitation film made in 25 years. Polite society may be unsure whether this revival is a good thing.

The plot follows familiar territory: in the last days of doubleyou doubleyou eye eye, Kommandant Helmut Schultz (Esser) and his sidekick Wolfgang (Montague) oversees the inhabitants of Stalag 69, as the Allied forces close in. It’s a conveniently co-ed camp, housing both American and Russian prisoners; the former led by Jack Jones (Yankus), the latter under Natasha (Kot), who was captured by the Germans despite a desperate naked, machine-gun wielding bid for freedom. Both are now intent on escaping the tortures, inflicted on them largely in the name of dubious medical science, by the Nazis. Will their last desperate bid for freedom succeed? 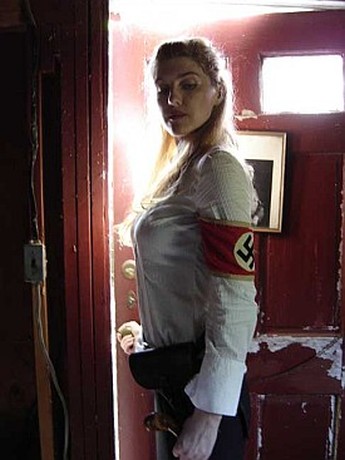 aren’t offended by something here, you’re not paying attention. Women are abused and men tortured – there’s a lovely homage to I Spit on Your Grave – while Helmut and Wolfgang are gay. Did we miss anyone? Make no mistake, this is extremely low-budget, with the production values often as wobbly as the accents [the girl attempting to be Scottish was particularly amusing to this true Scot]. But there’s no denying the energy on view – the film runs an epic 135 minutes, making it the Schindler’s List of Naziploitation. If one wonders whether judicious editing would be an improvement, just to tighten up and concentrate the trash quotient into 85 minutes, we rarely found it dull, regardless of its length.

The performances are all over the place; some ham it up, while other actors appear to be on some kind of medication, but Esser is effectively sleazy as the ruler of the camp, and Kot is also memorable – and deserves credit for putting up with a lot more than any actress should. It’d have been nice to have someone Thorne-like in the center; Helmut does have a sister, but she is more a supporting role than anything, and he is such a cream-filled puff-pastry that the Nazis come over more as derisory and laughable, rather than something to be feared, hated and despised – as was the case in Ilsa, and was part of what made it so memorable. One also wonders what the giant monkey is doing at the end – in the absence of any explanation by the film, I presume that’s a reference to Crocker’s previous film, The Bloody Ape.

You can’t judge any Naziploitation film by conventional standards, since it is aiming at an entirely different set of targets. Thus, it’s largely immune to criticism, since standards of “good” and “bad” have run, screaming, for the exit. All I can say is that we were entertained and appalled equally, which is exactly what I wanted. I don’t know whether Rob Zombie will ever get around to making Werewolf Women: in the meantime, Blitzkrieg will fill in more than adequately.