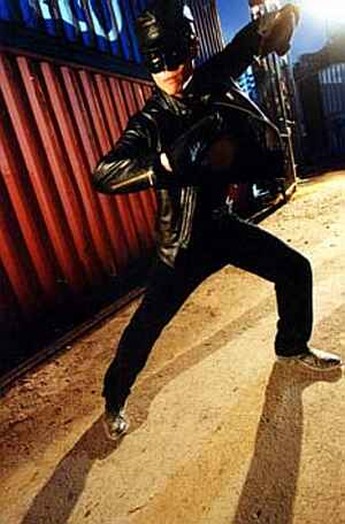 There’s no messing around here: inside three minutes, we discard the original, and from then on the film largely goes berserk. This isn’t necessarily a good thing, when some sequences and monsters smack more of a lacklustre Power Rangers episode than anything else, but there are certainly moments to make you go “cool!” and reach for another handful of popcorn. No Jet Li this time, he’s replaced behind the mask by Andy On (who should make a film called Prepositions, with Heroic Trio director Johnnie To) as the enhanced human who fights for what is right. Here, he’s up against – get this – a wrestling federation run by Tobin Bell, whose athletes (including Lords and WWE regular Rob Van Dam) have been spliced with animal DNA, and now transform sporadically into their wild counterparts. After Black Mask gets infected, he needs to find a cure – enter unconvincing scientist/love interest (Herrera).

Yuen Wo Ping choreographed the action, but you’d be pushed to tell, with a lot of wire- and CGI-work. The best is a fine finale, pitting On against Scott Adkins, who impresses in both acting and martial arts – though what his character is actually doing in the movie is anyone’s guess. And who is the target audience? Various impalements merit a high certificate but a lot of it is, frankly, juvenile, most obviously the irritating kid sidekick, guaranteed to annoy anyone who’s hit puberty. On the other hand, there’s some nice satire, such as the way the promoter creates a Black Mask wrestler, complete with merchandising. The result is all over the place – making it right in line with the rest of Tsui’s recent work. I leave it to you whether to take that as a recommendation.