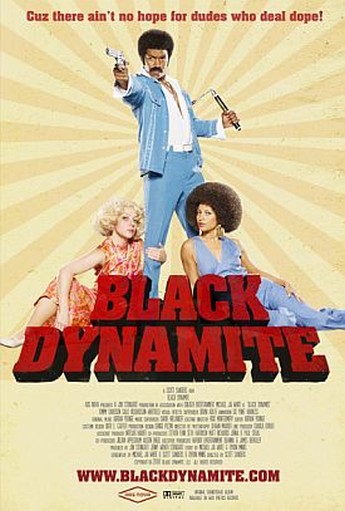 While there’s certainly scope for a parody of blaxploitation, it’s an area which has been well-travelled previously, and this doesn’t bring too much more to the party. It could be that Sanders and White are too fond of the genre, because this comes over less as satire as loving recreation. Former CIA agent Black Dynamite (White) has to hit the streets again, first to avenge his brother’s death, then stamp out the drug-dealers who are targetting kids in his neighbourhood, and then an evil plan by “The Man” to shrink black men’s genitals, which goes all the way to the highest level of early-seventies America. He’s helped out by a bevy of characters with names like Mo Bitches, Chocolate Giddy-Up and Tasty Freeze (Hall), as he kung-fus his way through the bad guys and seduces the ladies, all accompanied by an appropriately funky soundtrack.

It certainly has its moments, particularly late on, as for the delightfully convoluted way in which Dynamite and his cronies unravel the plot, going from M&Ms through Greek mythology to phone area-codes. There are other moments like that which are laugh-out loud amusing, but there aren’t enough of these. Too often, the approach taken seems to be mostly to present the tropes and styles of blaxploitation cinema, and wait for a laugh, rather than exaggerating or satirizing them in any way. You’ve got to respect the attention to almost every aspect of the production (the obvious CGI seems out of place), but why would you want to watch a slavish recreation of a genre, when you can just go watch the films themselves? White proves he has solid action potential (he’s a legitimate black-belt) and it’d be nice to see him in something more original. While never a chore, this is far from the funniest or most memorable spoof of the style.