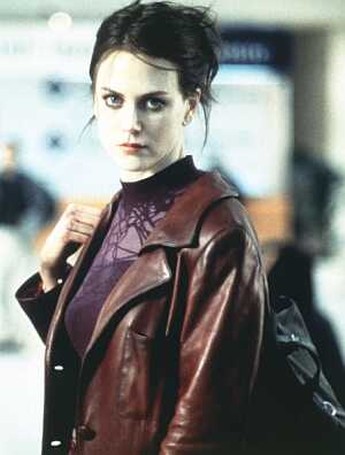 Getting a mail-order bride from Russia seems such a fraught process that anyone could come up with a million terrible yet potentially interesting things which could result. Unfortunately, this film chooses one from fairly far down the list – bank clerk John Buckingham (Chaplin) goes ahead anyway. The good news is, he gets Nicole Kidman. Well, a Russian called Nadia played by her. The bad news is, she doesn’t seem to speak English. The very bad news is, her two cousins (Cassel and Kassovitz) soon appear too and very bad things start to happen. Only in Hollywood would you get three Russians played by two Frenchman and a Hawaiian raised in Australia, though this is set in Britain, and the dry humour is perhaps the nicest facet of the film.

What we don’t get is much reason to connect with the characters: Nadia’s mysterious past is scarcely less obscure than Chaplin’s life. Discovering his fondness for s/m is about as revealing as it gets. This would be fine, if such shortcomings were made up for in plot, but they aren’t. This plods along, almost exactly as you’d expect, though you may be briefly diverted wondering if bank security is really as lax as it seems (all you need to pull off a robbery is patience and an empty guitar case, it would appear). Despite the lack of material to work with, the actors do their best, and the Chaplin/Kidman pairing has some spark. Eventually, however, it’s a hopeless task, and the movie ends – again, exactly as you’d expect.