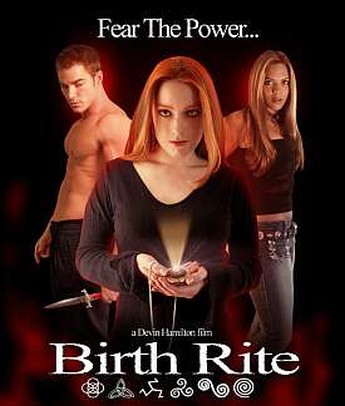 A coven of devil-worshippers is attacked by vigilantes and slaughtered; a young girl is rescued and adopted by one of the attackers. However, one of the coven, Roman (Wolske), also survives and 12 years on, returns to tell Rebecca (Sutherland) of her heritage, and enroll her in his quest for power. Nice idea, shame about the execution. Roman should be renamed Mr. Exposition, because his main talent seems to be a frightening ability to bring the film grinding to a halt every time he appears. Which is a shame, as the scenes around school have potential – for example, Rebecca delivering gory death to the schoolmates who diss her in the toilets. Cool, in a Sabrina the Teenage Witch with PMS way… However, all too soon, Roman’s sucking the life from the film yet again.

There is some credit due for casting Julie Strain and Brinke Stevens against type (as teacher and mother), though this, and some other factors, make me suspect that Hamilton plays on the same team as David DeCoteau, if you know what I mean and I think you do… [See our The Brotherhood review, if not] There are just too many glaring flaws, big and small: Rebecca never seems to care that her foster father killed her parents, f’heavens sake, and also refers to the very non-Aryan Roman as having blond hair. He, meanwhile, conveniently ‘forgets’ he can teleport with a snap of his fingers during the final battle. A little more work on the script…okay, a lot more work, would have improved this immeasurably.