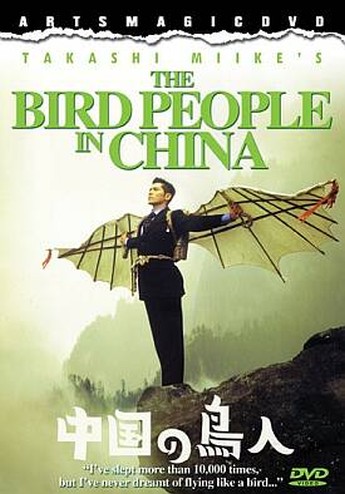 Takashi Miike is a gorehound, only at home with urban gangsters and ultraviolence, right? Wrong. Woefully wide of the mark – this film proves Miike is a genuine talent, capable of a far broader range than often thought. Some of his other work, notably Sabu, hinted at this; here, he fills a two-hour film without a single death [save in a yakuza’s nightmare], and instead delivers an impeccable modern fairytale. Businessman Wada (Motoki) is sent to China to investigate a jade deposit for his employers, but is met by Ujiie (Ishibashi), a mobster out to get repayment for a loan taken out by the company. Together, the odd couple travel deep into China’s hinterlands, a journey that takes a good 45 minutes; when they get there, they find things that will change their lives forever.

Yes, I know that sounds trite and cliched, and I desperately want to explain, yet daren’t – for the less you know going into this, the more delightful the result will probably be. This is a superb mix of humour and drama, with the two protagonists initially poles apart, before bonding, then finally parting paths again. It’s partly like a comedic version of Apocalypse Now, with neither man prepared for their trip or the secret held by the village that is their destination, yet still has traditional Miike elements: as in his Black Society Trilogy, the central characters are strangers in a strange land. However, here the pieces are arranged in a totally different and entrancing way.

A big plus is the lush locations; the film was shot (guerilla-style) in China, and the spectacular landscapes look almost too grandiose to be real or on Earth. After a frenetic start that captures the ferocious pace of modern life almost too well, cinematographer Kôji Endô wisely just sits back and lets the beauty of the scenery speak for itself. Once the secret is revealed, the film does lose its direction a little, but eventually regains it for a stirring climax that features one of the most haunting final shots you’ll see this year. Throughout, there are lots of little touches of fabulous imagination, and when combined with the aviation theme, it’s easy to envisage this as an animated feature from Hayao Miyazaki.