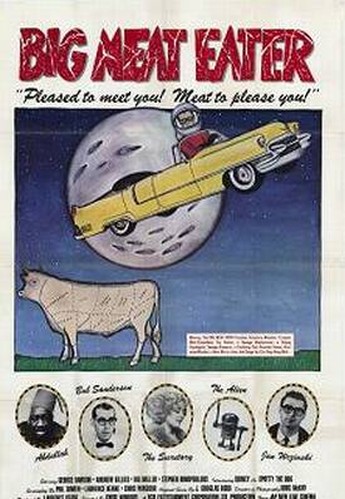 Making a movie which deliberately tries to be cult is an exercise fraught with pitfalls, because there are few things worse than a film trying too hard for the air of innocent self-awareness – except, perhaps, a film not trying hard enough. It’s difficult to be sure on which side this falls, but by the end, it’s almost entirely a failure. In the small Canadian town of Berquitlam, local butcher Bob Sanderson (Dawson) has been throwing his shop’s waste into the septic tank below it, unaware that is has now mutated into “balonium,” a power-source much sought after by aliens. They start resurrecting the dead and mutating the living, and sending them to to obtain the fuel – some of the bodies largely created by Bob’s near-mute, fez-wearing psychopathic assistant, Abdullah (Miller). Meanwhile, a local kid (Gillies) is trying to build an amazing project for the science-fair, the mayor is extorting everyone in town, and the local talent show is coming up. Oh, and did I mention this is a musical? It features toe-tapping songs like “Big Meat Eater”, “Mondo Chemico”, “Baghdad Boogie” and “Heat-Seeking Missile”.

It’s every bit as all over the place as that synopsis sounds. Some elements do work – I loved the use of tin-toy robots to represent the aliens – but most of the performances don’t have the level of enthusiasm and commitment necessary to sell the ludicrous concepts involved. I feel it maybe needs a more-consistent degree of tone; for instance, it’s almost impossible to tell whether this is set in the fifties or the eighties. The net result is that this seems like a cult movie made by people who have never actually seen one, only actually heard descriptions of them second- or third-hand. It has the wacky characters, nonsensical plot, off the wall imagination and cheap production values you’d expect from the genre, only falling short when it comes to actual wit and execution. I’m sure those who were involved with it all thoroughly enjoyed the experience. Unfortunately, as an outside, I was more or less left feeling cold as a Canadian winter.

Original review: Spoof sci-fi pic with a hint of Rocky Horror which throws everything but the kitchen sink (psychopathic Turkish butcher’s assistant, aliens, corrupt mayor, psychic Middle Europeans, etc) at the viewer. This scatter-gun approach has some hits, notably the bad effects (the aliens are really battery toy robots) but overall the result is too blatantly “let’s go and make a cult movie” to work. 5/10