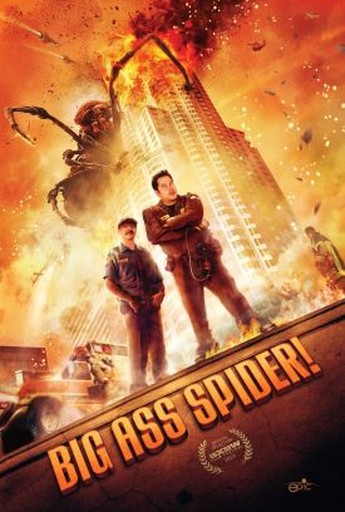 Does Wise have it in his contract that he must act opposite giant insects? After Infestation, he plays the Major in charge of the hunt for the titular arachnid, which was accidentally contaminated with a growth super-serum, and is now rampaging, at steadily-increasing size, through Los Angeles. His efforts to contain the eight-legged freak are helped, somewhat unwillingly, by exterminator Alex Mathis (Grunberg) and dim-witter Hispanic security guard, Jose (Boyar). The former, who has been looking for love in all the wrong places, falls for the major’s aide (Kramer), so rides to the rescue when she is cocooned and taken by the spider to its nest near the top floor of an LA skyscraper.

Three sentences do a very good job of covering all important elements of the entire plot, because this is not much about the storyline, as it is watching a CGI spider rampage through streets, parks and up the previously-mentioned building. As such, it’s a bit of an oddly mixed bag, with some of the effects being pretty damn good, while others barely pass muster (it’s possible this may be a deliberate nod by Mendez to its crappier predecessors). The first two minutes are fabulous: Alex regains consciousness in the middle of a war zone, and staggers through the devastated cityscape while an ethereal cover of Where is my mind? plays, before we skip back 12 hours to see how events unfolded to reach that point.

Nothing thereafter is quite as memorable: while it’s clear Mendez knows and loves his monster movies, and there’s a nice dynamic between Alex and Jose, this is more of an amiable watch, not an all-time classic. You’ll find yourself smiling throughout, rather than laughing out loud, as you recognize the elements which are being checked off. It walks an uneasy line between overly reverent replication of these and parodying them, with the film wanting to have it both ways, when the audience would likely be better served by a full-scale commitment to one side or the other. However, it remains several steps up from its less amusing, lower-rent cousins, thankfully demonstrating imagination which doesn’t stop at the title or poster.