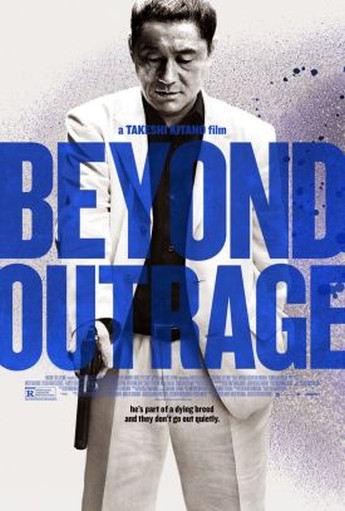 I didn’t realize when I watched this, that it’s actually a sequel to an earlier work by Kitano, Outrage, which I somehow managed to miss entirely. I was just intrigued to see Kitano returning to his yakuza roots: I think the last film of his in the genre I saw was Brother, back in 2000, after a spell in the nineties where it seemed like there was a new one from him almost every six months. But it seems Kitano got bored with the field and drifted off to other kinds of movies for a decade. Good to have him back though. This focuses on the Sanno-kai gang, who have now become so powerful under Kato (Miura), they feel they can kill cops with impunity. The police feel otherwise, and task Kataoka (Kohinata), a detective with a somewhat murky association to the mob, with bringing them down. After his first attempt to provoke war with a rival gang fails, he switches tack and gets veteran gangster Otomo (Takeshi) out of jail on parole, allowing him to carry out a mission of personal revenge against the Sanno-kai. Which, of course, suits Kataoka just fine.

There’s some of Clint Eastwood about Takeshi here. He plays a world-weary type who has seen far too much violence – but, hey, if that’s the only way to solve the problem, I suppose someone has to do it. That makes him a perfect weapon to use against Kato, who is trying to drag his gang into the modern era, and so is entirely ill-equipped to deal with someone as utterly old-school as Otomo. It’s the clash between these two, even if they don’t actually share many scenes, which powers the drama is the film’s most effective strength. The main problem is Takeshi apparently losing interest in most of his own characters – not least, his own character, who retires from the storyline for much of the second half, having accomplished what he wanted. Also from the “facts I learned later” file, it’s apparently part of a trilogy, which may explain the unsatisfactory nature of an ending that resolves little. As such, it’s more The Two Towers than The Godfather II, though I was still impressed enough to add Outrage to my Netflix queue for later perusal. So, at some point, we’ll see whether that causes me to revise my opinion here.