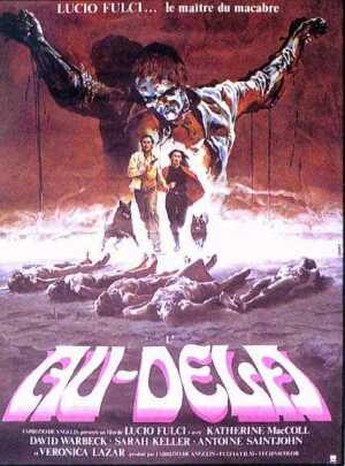 Things the movies teach us, #848: when called to investigate a flooded basement, plumbers should start by knocking down the nearest retaining wall. It’s nice to be reminded, now and again, why I find most Italian horror movies pathetic and laughable – or, in this film’s case, again and again. Fulci seems to be going for an Argento-esque delirium, where reality and imagination blend into one; the end result is nearer to an incoherent mess, where stupid people do stupid things. MacColl plays the heiress to an Louisiana hotel which just happens to be one of the seven gateways to hell. I would, at this point, be sodding right off, but she hangs around, together with doctor Warbeck until large numbers of zombies attack.

The ending does make artistic, if not logical, sense, and you can’t argue with the copious gore, the execution of which varies from great (young girl gets her head blown off) to ludicrous (a tarantula attack where one arachnid is clearly stuffed – for some reason, they also squeak). However, every character is so idiotic, the film is empty and meaningless. This isn’t to say it lacks entertainment value, you just have to provide it yourself – for example, chanting “In the head!” every time the doctor shoots a zombie in the body, since he’s too dumb to grasp that won’t stop them. The result is, any tension quickly evaporates because you spend more time laughing at the film than screaming. As a comedy, it’s a hoot; as a horror film, it’s impossible to take seriously.