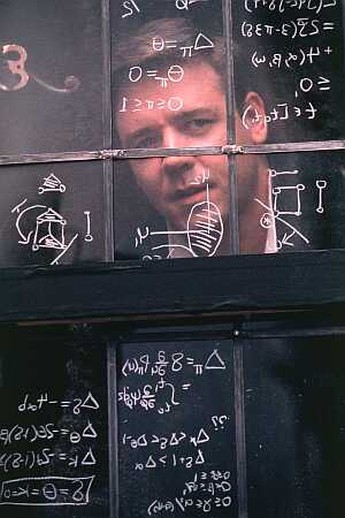 John Nash: gifted mathematician or loony? Or perhaps both? The film balances between the two options, in a generally sympathetic portrayal, covering almost fifty years in Nash’s life up to his Nobel prize. There may not be much tension here – you must have been living under a rock to not be aware of the story – it is an interesting and convincing insight into the word of the mentally ill. The performances here are good, though I wouldn’t have had Crowe or Connolly (who play Nash and his long-suffering wife, Alicia) down as particularly Oscar-worthy. The film’s strength lies more in its script, and Howard’s depiction which portrays Nash’s delusions so matter-of-factly that the audience believes in them almost as strongly as he does.

When that particular shag-pile carpet is pulled out from under you, the film skips from thriller into more (indeed, almost entirely) psychological territory. I note with some qualms lines like, “There is no conspiracy…it’s all in your mind”, with its subtle insinuation that all conspiracy theorists are deluded and mentally ill. Hmmm…file Howard alongside Spielberg, as film-makers to be viewed with suspicion. That aside, this is a moving, powerful and effective piece of work which was better than expected, and largely avoided the feared saccharine found in some of Howard’s other work.