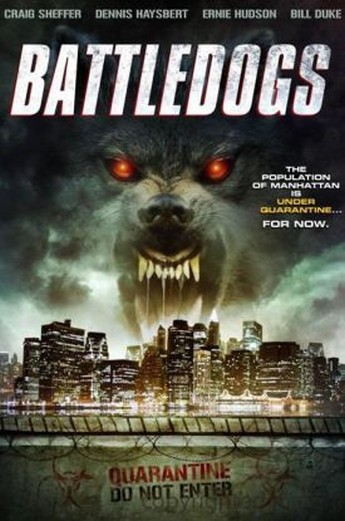 While shooting wolves, wildlife photographer Donna Voorhees (Richards) is bitten by one. Flying back home, she feels unwell and in a toilet-stall at JFK, turns into a wolf, and goes on a rampage, attacking and infecting many others at the airport. The military, led by Lt. General Monning (Haysbert) use gas to suppress the incident, and everyone involved is quarantined in a government facility, while they try to find Patient Zero. Monning sees a military potential in them, even as things spiral rapidly out of control and the wolves take Manhattan. But scientist Dr. Ellen Gordon (Vernon) and good soldier Major Brian Hoffman (Sheffer) simply want to contain the outbreak and find an antidote, before the government adopt the sterilization option, and cleanse New York with extreme, fuel-air bomb propelled, prejudice.

The cast are fairly solid, with Ernie Hudson playing the President, which is kinda ironic, since Haysbert is also best known for playing a black President, in 24. There are two main problems here. The first is a plot which makes absolutely no sense, with holes big enough to drive a bus through, such as the Voorhees basically just wanders out of the facility, which one would imagine, given the circumstances, would be fairly heavily-guarded. Monning’s actions don’t make much sense either: how exactly is turning soldiers into rabid, uncontrollable pack animals much help in war? Especially when tranquilizer darts take them down in about two seconds. Meanwhile, we learn that if the military are pursuing you in a boat, they won’t bother firing at you, but will instead give the chase if you bump into them with gentle to moderate force.

And the second thing? Really crappy effects. No, I mean REALLY crappy effects. Even by the low standards of The Asylum, these werewolves at no point ever look like they are part of the same landscape as the actors. Richards was actually one of the grandkids in Jurassic Park, 20 yeas ago: the effects there were infinitely superior to the ones here, which look as if they were made by a 13-year-old. To The Asylum’s credit, they do seem to have scored some decent locations. which help the other production values, but any time the wolves gallop into view, whatever disbelief you may have managed to suspend, comes crashing back to the ground like the chandelier in an Andrew Lloyd-Webber musical.