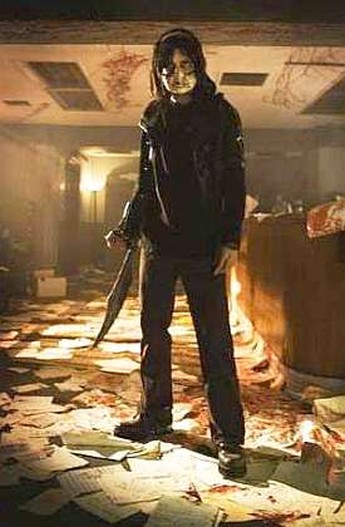 Eleven years ago, the reign of the serial killer known as Basement Jack (Peter-Kaiser) – for his habit of hiding in his victims’ cellars – was brought to an end, just as he was about to end the life of Karen Cook (Morrow). However, an insanity plea got him off life in prison, and after a decade in an asylum, he’s freed, to finish off what he started, though Karen is now a nomad, forced to keep on the move as she tries to stay one step ahead of Jack. She ends up in the town of Downer’s Grove, driving a car belonging to a previous victim, and has to try and convince the doubtful local cops, in particular Chris Watts (Skoryna) that she’s more the solution than the problem. Meanwhile, the storm of the century closes in on the town, providing the perfect opportunity for Jack to continue the murderous ways instilled in him by his loopy mother (Lowry) years before. Will the “somewhat limited,” shall we say, resources of law enforcement in Downer’s Grove prove sufficient to stop the cellar-dweller from getting to his target?

It’s straightforward stalk ‘n’ slash, driven in large by the creepy scenes in which we see Jack’s upbringing. Given those, it’s frankly a surprise he didn’t end up even worse, and Lowry is a worthy addition to the Joan Crawford Memorial Hall of Fame for Cinematic Mommies from Hell. I also enjoyed the nods to the company’s previous movie, Evilution, with Watts living in the same apartment complex at the center of things there – the manager from that film also returns. Compared to he and Jack, neither Cook nor Watts make much of an impression; while serviceable, the former is basically your standard, boilerplate horror heroine, and Skoryna’s cop is neither convincing as a policeman nor compelling as a character. However, this is par for the genre, which is all about the killer and his kills (there’s one sublime moment of CGI that use it better than much larger movies), and the movie makes up for its shortcomings there, with Jack coming over as a psychotic version of Edward Scissorhands, his face largely hidden behind a mass of tangled black hair. We’d certainly have screened this one, until we realized it comes out on DVD November 17th. Curses!