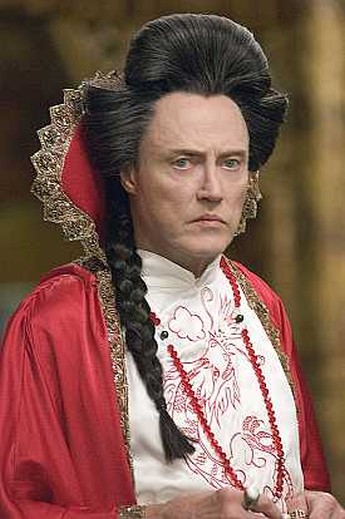 I’ll throw my hands in the air, and admit it: I laughed. Rather a lot. It’s an entirely stupid idea, basically, this is Enter the Dragon, only ping-pong replaces the martial arts. But this is executed with enough energy to make it thoroughly amusing: I mean, how can you go wrong with with Walken – in full Walken mode – playing Chinese lord Feng? It seems like Jack Black must have been unavailable, Fogler channeling him shamelessly as the former table-tennis champion, now reduced to doing trick shows in Reno [the writer and director are part of the Reno 911 crew]. He’s recruited by a FBI agent Rodriguez [Lopez] to infiltrate Feng’s tournament of champions, but must first regain his skills under blind master Wong and his niece (Q).

This is the kind of film where you should know what to expect going in: dumb comedy. And, there’s absolutely no question that the film delivers this, though it’s not as inventive as it could be. The sport would seem to lend itself to all manner of CGI radness, but only sporadically is that kind of imagination to be found. Instead, the main delight is a performance from Walken, who is not so much out in left field, as climbing over the fence there, and heading for the hills. He has now reached the stage where he doesn’t bother acting – he simply is. That’s a joy to watch, and the collection of mannerisms which is his performance lift this above being a simple collection of ball whacks (in both senses). The Oscars will likely overlook this come the end of the year; Walken, on the other hand, deserves at least some consideration.