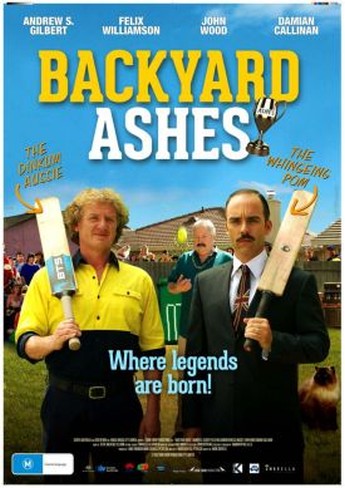 Dougie Waters (Gilbert) has an idyllic and quintessentially Aussie life: work during the week, but at the weekend, get a few mates over for a barbecue, some beers and a bit of backyard cricket, a miniature version of the game designed for the garden, and with its own unique rules. Hit a six and you’re out; catch a ball on one bounce, with one hand, and it’s an out too – as long as you have a drink in your other hand. But the peace is shattered when new boss Edward Lords (Williamson) – a snobby Pom, naturally – starts axing Dougie’s mates. Worse is to follow, when Lords moves in next door to his employee, and their relationship is frosty rather than neigbourly. However, it becomes positively Arctic, after an unfortunate incident involving Lords’ prized pet cat and Dougie’s barbecue. There’s only one way to settle things: a backyard match of the century, between Australia and England.

And, let’s be honest, those are about the only two countries which would probably “get” this film, relying as it does on an equal mix of cricket and cultural, particularly class-based, humour. It’s all thoroughly predictable and stereotyped, but the latter is done with an even-enough hand not to be a problem; credit to Williamson in particular, for taking what could have been a sneering caricature and giving it some pathos. While never exactly subtle, it takes a warm-hearted approach to proceedings which is kinda endearing, working on the apparent basis that most of the world’s problems could be solved, if only everyone would get together over a barby and a six-pack. I get the sense there is a fair bit of national or even local colour here, so this likely plays better in Wagga Wagga, where it was filmed. But the rough-hewn charm and novelty value just about allows it to skate by for a less Antipodean audience.