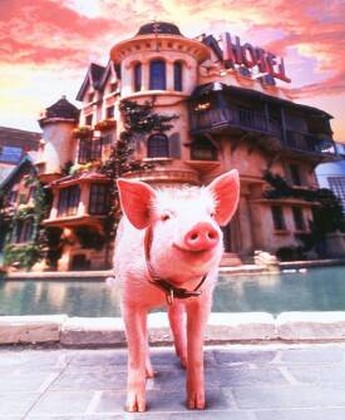 I can see completely why this tanked at the box-office; too darkly surreal for kids, it’s still a film about cute, talking animals. Yet, in the six years since its release, it has acquired a cult following, to the extent that the Box Office Prophets site named it the #2 underappreciated film of the past decade [in case you’re wondering: The Iron Giant]. This time, Babe is alone in ‘Metropolis’, at a hotel that ends up entirely populated by animals. Most of them are captured, and it’s up to our porcine hero, a couple of friends, and Mrs. Hoggett (Szubanski) to save the day.

I think I realised this was a different kind of movie when the rats started singing Je Ne Regrette Rien. It has a Tim Burtonesque feel, as if it takes place in an alternate universe, and not just one where animals talk; sizes and colours also seem out of whack. In this strange, not particularly nice world, bad things happen to good people with relentless ferocity – “Chaos Theory” is the term the movie uses, another suggestion that kids are not the intended audience. Then it all collapses into a rushed finale where an over-inflated Mrs. Hoggett bounces around a banquet hall on bungee cords. It seems totally out-of-place after everything else. From a technical viewpoint, it’s an amazing piece of work (rarely has the “no animals were abused” credit seemed less plausible), but a less-appropriate ‘G’-rated movie is hard to imagine.