We saw Avatar on Tuesday night, in IMAX 3-D. Well, I did, anyway – the relentless camera motion made Chris’s motion-sickness kick in, and she spent much of the moving trying to fight back her nausea. I know how she feels: as the storyline unfolded, I had to restrain my own rising tide of vomit – though in my case, this was triggered by the yawning chasm between the stunning technical aspects, and the storyline that was not only a cobbled together hodgepodge, it was a two-hour forty-minute anti-technology, anti-human, screeching polemic, which we will forever refer to as, Dances With Blue Things.

Before getting into the pitiful excuse for a plot, let me first say, as a technical achievement in whizzbangery, it’s quite magnificent. The alien world of Pandora is realized in an incredible way, populated with alien creatures and a landscape that, from the ground up, makes it clear, to quote one character, “We’re not in Kansas anymore.” [a line that, like much of the movie itself, was cynically lifted from another, superior film] If you’re going to see the film, make sure you see it on the biggest screen possible. Because, then, there’s a chance the visuals might help distract you from the story-line. 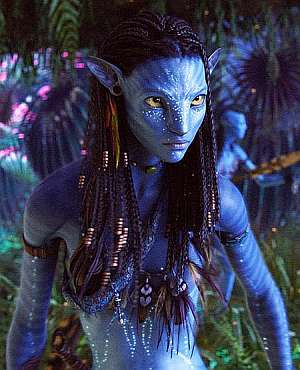 Quick summary.  Humanity, having screwed up Earth, has now moved on to Pandora, a lush, forested moon in the Alpha Centauri system. Arriving there is Jake Sully (Worthington), a paraplegic ex-Marine who is taking over for his deceased brother as an avatar pilot. These avatars are vat-grown hybrids between humans and the native Na’vi population and are used to explore the planet, in the hopes of fostering peaceful interaction with the somewhat combative Na’vi. The pilots are linked remotely to the avatars during their waking hours, experiencing what they do and controlling their bodies. On his first mission, Jake becomes separated from his team and is rescued by Neytiri (Saldaña, left).

Which is where the wheels fall off the plot, and it becomes mired in a combination of painful predictability and pretentious pomposity. As Jake learns more about the Na’vi – who resemble eight-foot tall Smurfs with USB connectors in their pigtails – he inevitably grows to love and appreciate their native culture. His original mission was, in part, to find a way to get the tribe of Na’vi to move so we could use the valuable mineral on which they are sitting. When he realizes this will never happen, it triggers an attack by the industrial-corporate forces under Colonel Quaritch (Lang), and Jake completely rejects his humanity, becoming the leader of the Na’vi forces in his avatar body, and taking them into battle against the invaders.

Even Sully at one pont calls the philosophy of the Na’vi “tree-hugger crap,” and it’s a rare moment of honesty, because that’s exactly what it is, propagating the myth of the noble savage. For example, one core aspect of the Na’vi lifestyle appears to be that it’s okay to slaughter other animals in the forest – as long as you apologize to them afterwards. Well, I bet that makes feel alien Bambi, whose twin hearts you just stabbed with your large knife, feel a lot better as their life ebbs away. The Na’vi come across as the kind of smug, hypocritically pious jerks who insist that everyone has not only to respect their way of life, but bend over backwards to fit in with it – yet still need a human to solve their “time of great sorrow”. Add in the fact that it looks like all the CPU cycles went on the landscapes, with the Na’vi looking less than convincingly alive than the local lichen, and you have a gaping hole at the heart of the movie.

It’s almost as if Cameron is trying to make up for Aliens, a film which, if you think about it, basically had the somewhat questionable moral that genocide is sometimes a pretty good idea. There, the humans were the good guys and the alien creatures the villains, with no shades of grey. Here, the roles are completely reversed, and the problem is, it’s a much harder task trying to get me to empathize with blue, cat-like alien hippies, who would be really good in the NBA. I’m sure it’d bring audiences around Alpha Centauri to their feet though. At the end, Quantich asks Sully, “How does it feel to be a traitor to your race?” and he’s right, as Sully abandons his body entirely, in favour of the avater. However, it’s a question that should probably also be posed to James Cameron, whose opinion of the bulk of humanity is clearly that of a Hollywood liberal, isolated from everyday reality.

It doesn’t help that the rest of the storyline is equally ham-handed. Clunky metaphors for Iraq abound – or maybe for the colonization of North America, it’s hard to be sure – with characters such as the one played by Giovanni Ribisi, who could be directly channeling Paul Reiser’s corporate drone from Aliens. Other films more or less shamelessly strip-mined include Dances With Wolves, The Matrix, Braveheart, The Emerald Forest and, most obviously of all, Hayao Miyazaki’s Nausicaä of the Valley of the Wind. The last-named covers much the same ecologically-conscious territory, pitting technology against nature, without making the audience feel like a baby Harp seal, or pissing on us, collectively as a species.

Can I also  that the material for which we are plundering Pandora is called – and I kid you not – unobtainium. While this has been a joke name applied by scientists for decades, its conversion into an apparently serious use here provoked a derisive snort. It’s like Cameron thought when writing the script, “Well, I’ll come up with a proper name for the stuff later,”  then promptly forgot all about it. One can imagine him slapping his forehead and going, “Dammit! I knew there was something I meant to do!” at the premiere. It should have been on the list – right below stopping James Horner from writing another crappy song for the end-credits.

There is a definite moral to be drawn from the film. But I should warn you, it probably isn’t the one Cameron wanted. In future, if we find another planet, with resources which we want to have, the human race should not bother trying to negotiate with any local inhabitants – because according to Avatar, this will lead to us getting our butts kicked by the local insurgents. A better, less painful (for us) approach can be found in another Cameron movie. What we should do in order to secure the mineral rights is simple: “Take off and nuke the entire site from orbit.”

After all, it’s the only way to be sure.