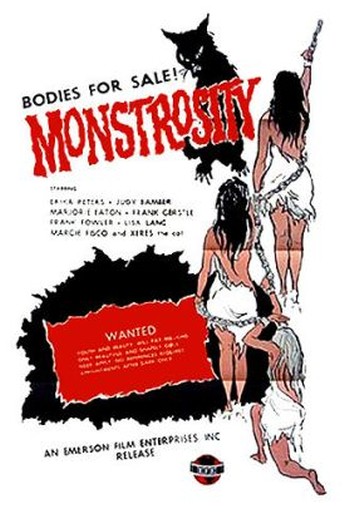 This is another case of a non-terrible film, unjustly maligned because those merry pranksters at MST3K got their claws into it. There’s enough here to suggest a remake would be a good idea: as I’ve said often enough, they should be remaking films with unfulfilled potential, not those which were already good to begin with. The central plot here revolves around rich, old lady Mrs. March (Eaton), who is intent on surviving past her body’s decay, and hires the unsubtly-named Dr. Frnak (Gerstin) to find a way to transfer her consciousness into a younger, much less wrinkly body. To this end, she hires three foreign servants, who show up at her house, unaware they are actually candidates for an unwilling body donation. The Mexican one is found to be flawed, so is used by the Doctor for an experiment which succeeds in transferring the consciousness of a cat into her. [She spends most of the movie thereafter, coughing up hairballs, though does at least keep the house free of rodents]. The other two, allegedly Austrian Nina Rhodes (Peters) and even more allegedly “English” Bea Mullins (Bamber), realize something is up, and need to figure out how to escape Mad March’s plans for one of them.

Disappointingly, the consciousness transplant appears to be a non-invasive procedure, involving a lot of flashing light and references to atomic stuff – this being 1963 – rather than surgery. However, it is actually an interesting idea, and Eaton, whom you may (or may not) recognize from her bit-part in Mary Poppins, gives it her all, and makes this an early entry in the “biddy horror” genre. Gerstle, however, comes over as blandly uninteresting, and you wish the script had been handed over to Hammer. You sense they could have done much more with it, perhaps casting Peter Cushing as the Doctor, to add the necessary gravitas to aid with the necessary suspension of disbelief. [They’d at least have got the English accent right…] It might also have made a good Twilight Zone episode, especially the ending, which has a sneakily grim twist to it in a couple of ways. The admittedly numerous flaws, are less in the script than the performances and casting, along with production values that also struggle to reach a level commensurate with the concept.