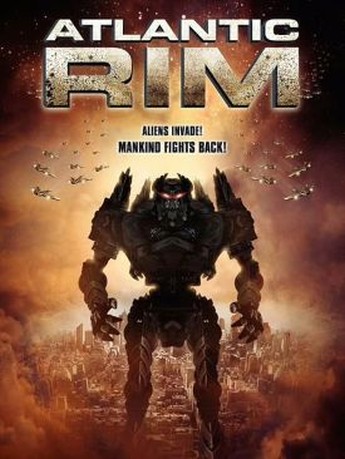 As is The Asylum’s standard practice, it was released a little in advance of the movie it is mockbustering. The film starts on an oil-rig – curiously, operated by a 75% female staff, though since we only see four workers, small sample size applies. The rig suddenly vanishes, and the military, led by Admiral Hadley (Greene, doing his best, but clearly thinking of his pay-cheque) sends in the three prototype robots to investigate. There’s Red (Chokachi), the cocky maverick; Tracy (Moore), the love interest; and Jim (rapper Treach), who would be the heavy favourite to die first. ‘Cos he’s black, see? They encounter the first beast, which Red eventually helps waste, albeit at the price of some coastal real-estate and getting court-martialed for didobeying orders. Jim proves he’s a nice guy by rescuing a young girl from a bar, without even asking what she was doing there. And Tracy hangs around in love-interest mode. But, of course, there isn’t just one of these things, and the other is heading up the East coast to New York.

The effects here are surprisingly decent, with the creature itself imaginatively-realized, made from equal proportions of teeth, limbs and irritation. Truth be told, it’s more realistic and lifelike than the characters: Red’s reaction, on learning that Tracy hooked up with Jim, is so subdued, the only possible conclusion is homosexuality. None of the trio come over as anything even remotely interesting or three-dimensional; the older actors, such as Greene, or Nicole Dickson as NASA scientist Dr. Adams, who created the robots, escape with less damage, delivering their lines with considerably more seriousness than they deserve.

But in general, the Asylum mockbusters work best, when they don’t try to mimic their better too slavishly: where their Worlds worked, for example, was because what it lacked in spectacle, it made up in C. Thomas Howell’s character, which was better rounded and more sympathetic than Tom Cruise’s. Here, that’s hardly the case: while entertaining enough to sustain a brisk 82 minute romp, you’ll more often be laughing at the film, rather than with it.