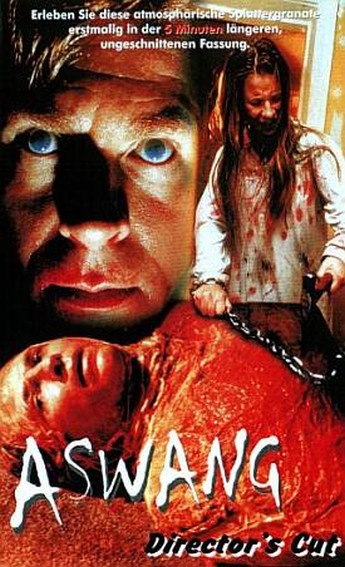 First off, it’s not pronounced like Beavis + Butthead fans might imagine: try “Os-wong”. Yeah, but what is it? A mythical Filipino creature that preys on unborn children, that’s what – although this is set near, er, Milwaukee. How a clan of these monsters ends up there is unexplained, but despite this obstacle and a tiny budget, often obviously, the end result still has menace and some memorable moments. It centers on a heavily-pregnant surrogate mother (Paukstelis), who visits the family estate of the father (Moses); it’s not long before she discovers things aren’t quite as they seem. I guess the big clue is probably when she’s attacked by the astonishingly-long tongue of her mother-in-law, a scene that ends with…no, I’m not going to say. You wouldn’t believe me, anyway.

It’s all entirely laughable, makes little or no sense, and the tongue is about as convincing as a piece of rope. However, there’s lots of conviction and enthusiasm, as well as a chainsaw-wielding madwoman. Plus, to paraphrase Margaret Cho, “And then there’s the hoe”…you’ll understand when you see the film. If I seem somewhat reticent, it’s because this is probably best viewed with no preconceptions. Or, being honest, expectations. It’s hardly a lost classic, and invoking The Evil Dead is a stretch (there’s a reason Sam Raimi has made Spiderman 2, while Martin + Poltermann, er, haven’t), but as a silly cheapie, it’s not bad. Certainly the best Filipino monster movie ever made in Wisconsin, that’s for sure.

[Note: the DVD comes with a new 5.1 Dolby Digital soundtrack, which is perhaps the most badly-mixed I’ve ever heard: the dialogue is way too low, and the music way too loud. After two minutes, we went back to the old 2.0 one]