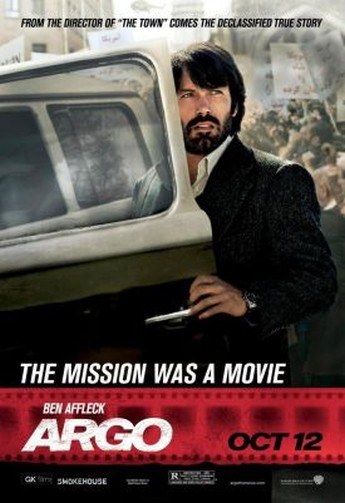 This one’s closest cousin is probably the heist flick. For, while there have been “rescue the hostages” movies before, this one relies almost entirely on sleight of hand and subterfuge, rather than going in with guns blazing. It’s a small side-light of the Iranian hostage crisis from 1980, largely forgotten, though there was an 1981 TV movie also inspired by the scheme, Escape from Iran: The Canadian Caper, which few bother to mention. As well as those captured in the embassy, a group of six managed to escape detection, and hid out with Canadian diplomats. The Iranians were looking for any Americans leaving the country, so to get the six out, exfiltration expert Antonio Mendez (Affleck) comes up with the idea of faking a movie-location scout, and pulling them out as part of the crew. It’s insane, but given the lack of alternatives, it just…might…work. But to do so, they have to own a convincing cover story, which is where Argo (based on a book by Roger Zelazny) comes in. It’s a space-opera script with a Middle Eastern vibe, and so the CIA sets up an office and begins pre-production, before Mendez heads into the lion’s den.

Of course, like all movies based on real events, it’s not entirely truthful. The fugitives didn’t sleep at the Canadian embassy, but in private residences, and according to Wikipedia they “easily” made it through the airport. Not quite the escalating series of tense encounters portrayed here, with tickets being with-held pending presidential approval, harsh interrogation from the Revolutionary Guards and the last-minute discover of the hostage’s real identities – though the Iranian reassembly of shredded documents is legit. But it’s entirely forgiveable, since the results are impeccably tense, and consistently entertaining: I didn’t look at the time on my phone once, which is certainly more than can be said for other Oscar-winners clocking in at over two hours. It could have benefited from better characterization of those outside Mendez, though Arkin deserved his supporting nod for his performance as a veteran producer, All told, if it might not have been the “best” film of 2012, it certainly wasn’t a choice which will embarrass the Academy in future years.