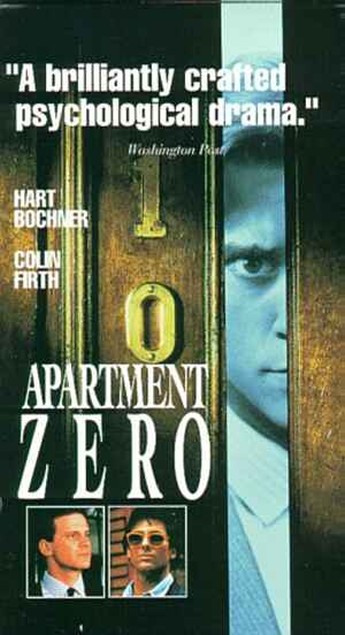 [Original version] While part of the “psycho flatmate” subgenre, this one adds a bunch of novel twists. First off, at the beginning it’s the central character, cinema manager Adrian (Firth), who seems the more disturbed, neurotic, obsessive and pretending to be English. In comparison, his new tenant, the affable Jack (Bochner), is outgoing, friendly and beloved by the other residents in the apartment block. The fact that the protagonists are the same sex doesn’t reduce tension either, since Jack is bisexual, but this angle never becomes more than a sideshow (especially in the video version, edited by the director).

As things progress, Jack’s psychoses are revealed, with Adrian suspecting more and more. A political edge develops, as someone is killing people, in the same way used by the local death squads under Galtieri. Just to add to the emotional carnage, Adrian’s mother is in the last stages of Alzheimer’s. Despite all this, there is a lot of (admittedly, very dark) humour, with the duo bitching at each other like an old queens’ version of The Odd Couple. Their neighbours, led by Bryan and Smith, are just as amusing, and you wonder if the place is really some kind of loony-bin.

For the most part, this is very effective, off-center stuff. Both actors are excellent, though some script points, such Adrian’s survival of a long fall with nothing more than a cut forehead, stretch credulity. At 117 minutes, there is too much slack, particularly in a first half which had both Chris and I denying responsibility for buying the movie. By the end, however, we were just as keen to claim the credit.

[Theatrical version] The press release claims this is its first release on DVD – which makes me wonder about the legality of the Platinum version, reviewed above and now out of print. This edition contains the theatrical version, seven minutes longer, albeit changes the director himself approved at the time. To tell the truth, we were hard pushed to tell the difference, though it’s a couple of years since we last saw the film. Perhaps more significantly, this release comes with two commentaries, by writer-director Henderson, plus co-writer David (Panic Room) Koepp and a “special guest”. While I won’t spoil that by saying who it is, he doesn’t actually have much to do with this film, yet is an interesting choice.

The film remains an fascinating, if imperfect, attempt at mixing genres which are rarely put together: part political thriller, part serial killer flick, with a healthy dose of black comedy, and for good measure, a solid chunk of homoeroticism. At first, Jack seems a stabilizing influence, bringing Adrian out of his shell; then questions start to plague the landlord about his tenant. There’s also a series of brutal murders, done in the style of the death squads that plagued Argentina a few years before. You wonder whether Adrian is to blame, until the pendulum of evidence apparently swings towards Jack. So, which one is truly insane?

The main weakness is, it tries to keep too many balls in the air. For example, the surplus of kooky tenants dragged in, when the marvellous Bryan + Smith are all the film needs; the political angle is undercooked too. But Firth’s performance has the twitchy edge of a young Anthony Perkins, while Bochner is a contrast, observing people with a calm gaze like that of Christian Bale. Both are excellent; their mutually manipulative relationship, combined with the claustrophobic setting, makes engrossing viewing. A creepy, psychologically twisted piece of work, this is definitely worth checking out.