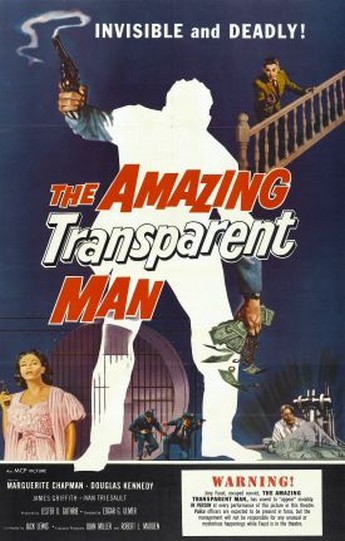 This is likely a case of a film being contaminated through association with MST3K. While certainly cheap, and limited in both scope and execution, it’s more workmanlike than any kind of cinematic travesty, being technically sound. In terms of plot, it’s actually quite an interesting mix of noiresque SF. Safecracker Joey Faust (Kennedy) is broken out of prison at the behest of Paul Krenner (Griffith), who is working to create an “invisible army”, thanks to a ray developed (under duress) by Dr. Peter Ulof (Triesault). Kremner needs Faust to steal more of the atomic materials needed for the process, and turns him temporarily invisible to that end. However, Faust has his own plans to utilize the potential open to an invisible man, and talks Kremner’s minion, Laura Matson (Chapman), into helping. Complicating matters: Faust doesn’t realize the guinea-pig on which the ray was tested, has dropped dead, and his invisibility is about to become intermittent in nature.

The main criticism which could reasonably be levelled at this, is a cheerful lack of any scientific basis. But this isn’t surprising, given it was made in 1960, when radiation was kinder, gentler and capable of doing anything from creating giant ants to improving your health. The low budget is evident in 90% of its running-time being located in Kremner’s country house, and also said running-time being a mere 58 minutes. [It was shot back-to-back with another Ulmer film, Beyond the Time Barrier, a fortnight being enough to make both] The performances are decent enough for the purpose, with Kennedy a good hard-boiled criminal, and Griffith a credible foil. While the effects here have certainly not dated well, this is by no means irredeemably bad: it’s a simple little B-picture, with no intentions of being other than an hour of entertainment. And you’ve got to love the disclaimer at the bottom right of the poster, which sounds right out of the William Castle playbook: “Joey Faust…has vowed to ‘appear’ invisibly at every performance of this picture in this theatre. Police officers are expected to be present in force, but the management will not be responsible for any unusual or mysterious happenings while Faust is in the theatre.” One can only imagine the hilarity that ensued…