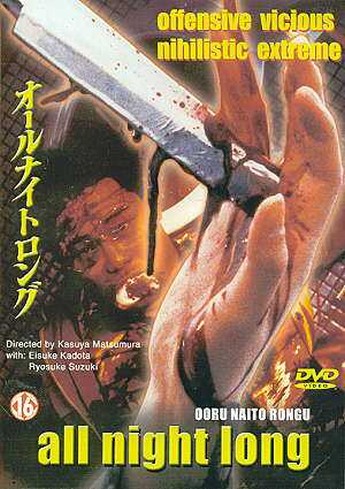 “Offensive. Vicious. Nihilistic. Extreme.” Well, two out of four ain’t bad – maybe I’m just getting jaded, but I didn’t find it particularly offensive or extreme. Nihilistic, it certainly is, and the director is clearly not even from the optimistic school of nihilism, going by what is a bleak and largely unlikeable piece of work. Not that this necessarily makes it a bad movie, mind you, since it’s told with some power; it’s just not a feel-good flick. Three kids, more or less total losers, team up for revenge when the girlfriend of one (and his sole source of happiness) is raped and murdered, only for things largely to go downhill from there, not least in a final twist which renders the whole night’s activities stunningly pointless.

After a striking yet medically dubious first piece of violence – I never realised you have a major artery in the palm of your hand – this settles down into something of a rut for the next hour before exploding again at the end. Give Matsumura credit for sticking grimly to his guns, and not flinching from or glamourising the violence, but having established very quickly that life sucks, he doesn’t have much more to add. However, this is just the first in a trilogy of, by all accounts, increasingly grim and misanthropic movies on the same theme. It’s hard to work out what else of interest the other two films could possibly say. Or, indeed, what precise point is made here, beyond a convincing argument for the severe failings of humanity, and life in general.