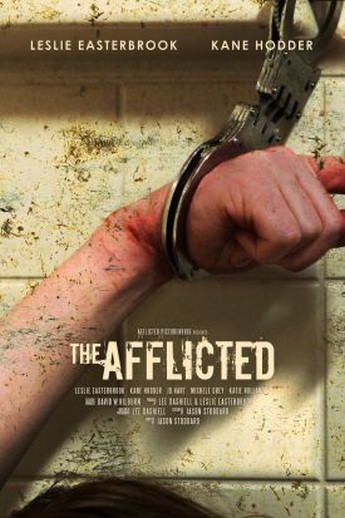 Despite a strong central performance by Easterbrook, this is one of those films where you’ll find yourself wanting to yell, “We get the point!” repeatedly at the screen, as it grinds its way through 85 minutes of abusive family relationships. Maggie (Easterbrook) is a religious fruitcake whose husband (Hodder), unable to tolerate life with her any longer, leaves her – only for Maggie to kill him, and tell their children he ran off with another woman. She then proceeds to take it out on their four children, in abuse that’s both mental and physical. When one of them plucks up the courage to report it at school, she fakes normality just long enough to yank them all into “home schooling”, and puts the literal board into “board of education”. One of the daughters is forced into prostitution to support the family, and it somehow manages to go downhill from there, passing through the stations of Grimtown and Unpleasantsville, before terminating at WhyTheHellAmIWatchingThis Central.

And that, dear reader, is the problem. There’s certainly scope for films which give you a glimpse into the abyss of mental illness, and the damage it can cause. both to the victim and others, when left untreated. However, there needs to be more to it than a simple depiction of insanity. Here, we very much join Maggie “in progress,” and are never given much insight into why she is as twisted and malevolent as she undeniably is. The result is closer to Cinderella’s step-mom than the force of evil for which the makers seem to be aiming: she’s evil, because the plot demands it. The presence of Jason Hodder adds little depth either, and despite his name featuring prominently. he’s gone after the first few minutes. It needs a better purpose, because you reach the bloody end, the credits roll, and you’re left wondering just what was the point of the whole exercise. It doesn’t educate, entertain or inform; instead, it just sits there and occupies 85 minutes of your time.