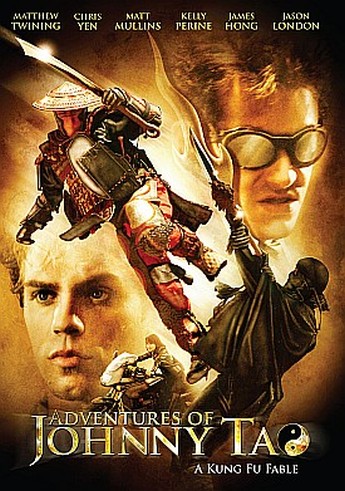 The concept of a family-friendly kung-fu flick is now somewhat irrelevant to us, being that no-one in our house is now under the age of 21. We do not rely on martial-arts movies for education, moral lessons or anything other than a fix of gratuitous violence. That said, this was not actually a bad time, once you got past the near-compulsory guff about some ancient demon, who can only be slain with a sacred spear, which was turned into a guitar by the father of our hero Johnny [Twining], before he vanished in a plane crash. Yeah: if you look up the words “total bollocks” in the dictionary, you’ll find the storyline here next to it. However, it’s briskly-paced and the action is surprisingly decent for an American flick. It may well help that the equally-inevitable guardian, Mike, who has been waiting for the resurrection of the demon, is played by Chris Yen, kid sister to the god-emperor of kung-fu flicks, Donnie Yen. It also has a nice sense of self-awareness: I like the fact that the villain’s zombie minions, whom he possesses, crave Krispy Kreme donuts as sustenance. It certainly makes a change from brains.

Anyway, through an unlikely set of circumstances, the demon is resurrected, takes over Johnny’s friend Eddie (Mullins), and it’s up to Mika and Johnny to ensure he doesn’t get the chance to… Well, the film is somewhat unclear on exactly what he’ll do – except perhaps plunder all the donut shops in the world. Still, He Is Evil And Must Be Stopped. The local police – make that the local policeman – are entirely ineffectual, but in fitting with the PG-rating that this appears to be aiming at, no-one is ever really hurt. Well, save one person, necessary to the plot. Guns are, otherwise, conveniently waved away in this plot. Still, it kept us awake at a late hour and after a long day of lucha libre, with enough wit and invention to overcome occasionally stodgy efforts at shoehorning moral lessons on the importance of friendship, loyalty and flossing twice daily into things. Could have done without that, but all told, this should entertain even those without small children, in need of life-affirming gratuitous violence.