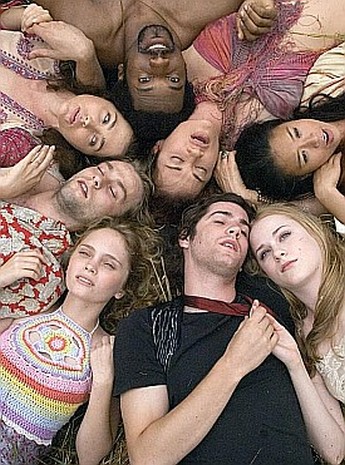 Playing more like a 135-minute karaoke video than anything, this takes the catalogue of Beatles’ songs, and shoehorns them into a 60’s storyline in which Jude (Sturgess) leaves Liverpool for America, and the father he never knew. In middle America, he finds Lucie (Wood) and her brother Max (Anderson), joining them as they move to New York on a voyage of self-exploration as the Vietnam war lurches towards its desperate conclusion. Rather than using the real McCoy as a backdrop against which the story unfolds, Taymor opts instead to have her characters perform cover versions of the the songs.

This brings you right back to the inevitable problem with musicals. There are those who can act; and there are those who can sing. One does not necessarily mean the other. And then there’s the predictability of characters called Jude, Prudence, etc. Even I, hardly a Beatles fan, knew exactly what was about to happen when the latter locked herself in a closet – a scene of startling unsubtlety, given she was a repressed lesbian. These songs were never intended for this purpose, and their use as such rarely seems anything but false and artificial.

However, Taymor’s visual sense is undeniable, while Lennon and McCartney were simply too good as song-writers for their material to be demolished easily. Some of the interpretations are actually imaginative and impressive – Eddie Izzard’s free-style For the Benefit of Mr. Kite standing out in a surreal way. On the other hand, there are ‘stunt cameos’ from the likes of Salma Hayek, whose purpose entirely escapes me. Writers Dick Clement and Ian La Frenais are better knows for their earthy British sitcoms than late 60’s hippie culture, and I suspect this might resonate better with those more familiar with the era and location: let the record show that Chris probably enjoyed this one more than I did. If I have to admire what this is trying to do here, I can’t say the film genuinely appears to succeed in much of it.