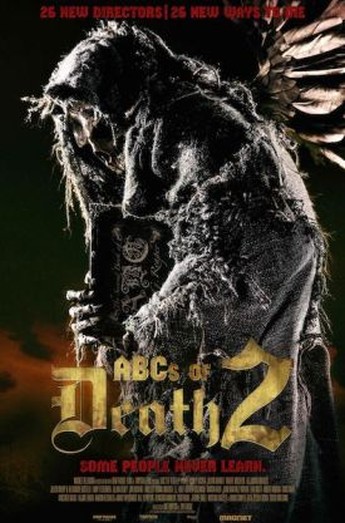 26 more films, each themed (loosely) around a word beginning with a different letter of the alphabet. And, just like the original, and entirely as you would expect, it’s an utterly mixed bag. With less than five minutes per film, it’s tough to provide anything like an actual storyline, never mind develop characters or themes. This isn’t necessarily a bad thing, as it should force directors to trim every ounce of fat imaginable from their creations. I remember reading a book of short-short SF stories, that referred to them as “blow-darts”, and that’s kinda what we have here. Except, that implies a certain consistency of appearance or style, which is certainly not present. And there are also some horrific mis-fires – the blow-dart equivalent of inhaling, rather than blowing, perhaps. Letter “F”, for instance, consists of a conversation between a woman stuck in a tree and a man on the ground. It succeeded in being boring, faster than just about any other movie I’ve ever seen. I guess that deserves a “well done”? Indeed, the middle of the alphabet, say letters F through L, was generally the weakest, with a series of sub-par efforts whose flaws outweighed their merits, to varying degrees.

Fortunately, the start and beginning contain a lot of very solid entries. I think our favourite was S, which told a complete, coherent story, and also had the best use of split-screen I’ve seen since 24 was at its peak. V also packed a wallop beyond its duration, and near the beginning, D is the most disturbing piece of stop-motion animation I’ve ever seen, feeling like a nightmare spawned by the combined minds of Messrs. Lynch and Cronenberg. It remains the ultimate horror-film for those with short attentio… Oh, look! A swallow! Sorry, where was I? This is a bit of a double-edged sword. While it means, if you don’t like one, there will be another along in a minute, it also means there are times where you want to hang around and see what happens next. For example, B is just getting going when it ends; though I imagine it may have been somewhat problematic, realizing the idea of a giant, radioactive badger which the concept appears to require. Best to think of this as a buffet: take what you want and forget the rest.