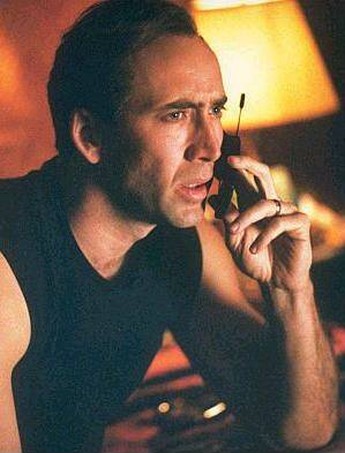 After watching this, you’ll probably want to wash your hands. For this is an almost relentless descent into the dark side (you know this, because the nearest thing to comic relief comes from Joaquim Phoenix), as private investigator Tom Welles (Cage) hunts the truth behind a convincing-looking snuff movie. The film admits early on that they’re an urban legend, but of course then goes on to find one, which sums up its approach. Everyone working in the porn industry is an irredeemable sleazebag (and are mostly foreign), while Nicolas Cage’s acting consists largely of pulling a repertoire of disgusted and shocked faces as he wanders through ever-more unpleasant places. It’s notable that the most horrifying moments are when banal evil has its mask removed (literally), rather than acting like a cliche as it does for much of the film.

The female characters do little except sit at home and mope; luckily, the male supporting cast get a chance to do better, especially Phoenix, as Welles’ guide into depravity. His gallows humour provides a much-needed escape from the unpleasantness. The grimy look is nicely executed – as well as being written by the same guy as Se7en, it shares the same darkness. However, it doesn’t really have much to say: there are sick people out there, and they do some very nasty things. That’s about the level of insight this movie offers, and you can get the same, or better, off ten minutes skimming a newspaper. And now, if you’ll excuse me, I need to go and take another shower.