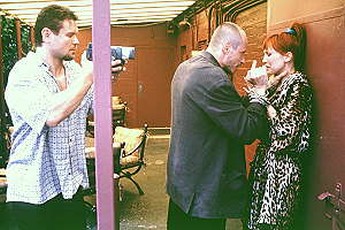 The trailer implies some kind of Natural Born Killers-style rant about violence and the media, yet the movie is both more, and less, than this. To start with, the media don’t really have much to do at all in the first half of the film – it’s only when they broadcast footage of a major character’s death that they become involved. This idea has a topical edge here in Phoenix, where TV stations recently were criticized for carrying a live broadcast of the last radio moments of a trapped fireman. Anyway, Eastern Europeans Roden and Taktarov – the latter an Ultimate Fighting title-holder – come to America to collect a debt, leave a trail of bodies behind them and find themselves hunted by cop De Niro and arson investigator Burns. It’s really only after the aforementioned major demise that things start to get interesting (though we can’t blame the actor involved, who does a fine job) as the media, led by Kelsey Grammer, become involved, though the film is also jabbing severely at the legal system. This does dilute its firepower, and if there’s a message in the film, I honestly couldn’t tell you what it is. Something about always knowing where the emergency exits are perhaps.