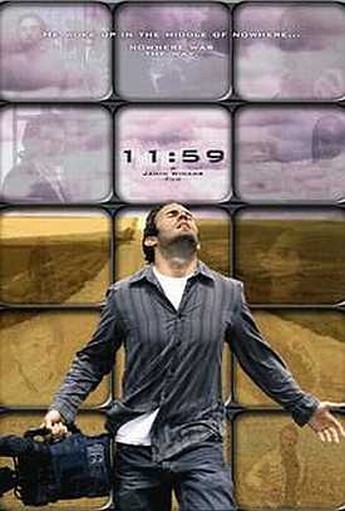 After shooting the capture of a man accused of child murder, who works on a politician’s campaign, TV cameraman Aaron (Bailey) has the station at his feet. However, in a night-club car-park, he loses consciousness, and wakes up in a remote, rural field, with 24 hours missing from his life. When he returns to the city, he finds out that the arrested man was shot outside the courthouse…but another murder has since taken place, with all the hallmarks of those allegedly committed by the dead man. Why will his boss not let him and his reporter colleague (Fuller) cover that story? I have a fondness for films, like this, that don’t feel the need to explain everything – such as the nuts-and-bolts of how Aaron goes from car-park to field. Much like the hero, you just have to accept it, and given that, the rest makes reasonable sense. In particular, the conspiracy is small-scale, rather than at the Illuminati-esque level, adding to the plausibility.

It also has a subtle character arc, deftly moving the hero from a man obsessed only with getting the story, to someone who realizes there is much more to life than that, and Bailey does well in the role. The media is viewed with a particularly jaundiced eye – always good for a point or two in my books – in particular, his boss (Ransom), who openly admits that dead little blonde girls get better ratings than dead Mexican kids. Initially, she does seem somewhat wooden, and the pace for the first half is too sluggish to be fully effective. However, just when the film teeters most, it lobs another curve at the audience and from then on things become a good deal more interesting. You could certainly argue the lack of explanation is a flaw, and that would be fair comment. On the other hand, from previous experience I know that it’s often better to have no explanation at all, rather than fobbing off your audience with something weak or unconvincing. Here, I think Winans was wise to not go there, and the end result is an impressive feature debut.